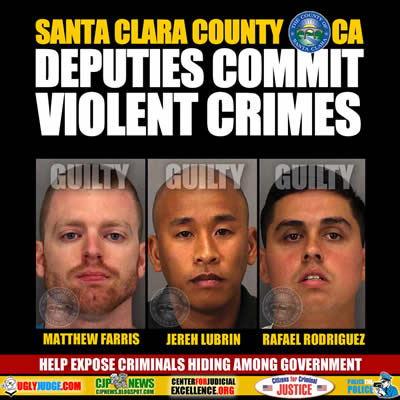 “SANTA CLARA COUNTY CA THOSE WHO WERE SUPPOSED TO PROTECT, DID NOT INSTEAD THEY KILLED HIM”

The question should not be “Are Santa Clara County Criminals Hiding among Government?” Instead it should be why does federal government not get involved more to investigate criminals among government? The fact is there are mountains of evidence, reports and victims who come forward each year reporting dishonest judges, lawyers, district attorney’s, probate investigators, police officers, sheriff deputies to name a few who never get this kind of attention. How many deaths are covered up and lied about to protect government employees who abuse their power and authority?

Three Santa Clara County jail guards were found guilty Thursday of second-degree murder in the fatal beating of a mentally ill inmate nearly two years ago, winding up a closely watched case that continues to spark calls for reform.

The jury deadlocked on charges the guards assaulted another mentally ill inmate earlier that evening. They also could not reach consensus on whether one of the guards had assaulted the same inmate a month earlier.

The panel’s decision followed a two-month trial in which attorneys clashed over how 31-year-old inmate Michael Tyree died in his single cell at Main Jail South on Aug. 26, 2015. The outcome is expected to have major consequences for what is perceived as acceptable when it comes to the use of force against inmates.

The guards — Jereh Lubrin, 30, and Matthew Farris and Rafael Rodriguez, 28 — stood emotionless as the verdicts were read in Santa Clara County Superior Court. They will be sentenced to 15 years to life in prison on the second-degree murder convictions. They had been free on $1.5 million bail each and on paid leave but were handcuffed and taken into custody after the verdicts as relatives wept. Sentencing is scheduled for Sept. 1

“Unfortunately, we can’t bring Michael Tyree back, but we will hold these people accountable,” District Attorney Jeff Rosen said after the verdict was read. “Everyone is entitled to be treated like a human being, whether they are a banker, law enforcement officer or inmate.” FULL STORY HERE

The biggest crime comes now when they won’t be held accountable like everyone else in society. They are in fact criminals found guilty yet they will get special treatment and may even keep their benefits. This is how government protects criminals over the public and allows them to abuse and even kill innocent people.