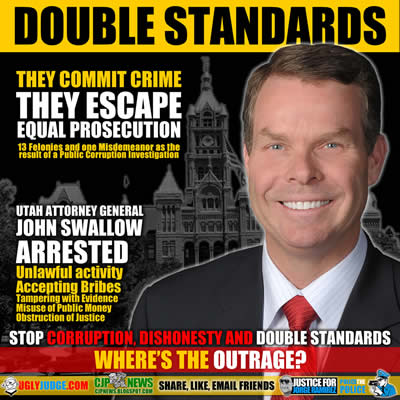 Utah Salt Lake City Attorney General John Swallows, How did a criminal like this find his way into the position of Attorney General? Fact is sociopath’s and psychopaths often make their way into positions of power.

State prosecutors leveled a new money laundering charge against former Utah Attorney General John Swallow on Wednesday, a little more than two weeks before a judge will decide whether he will stand trial.

Swallow now faces 13 felonies and one misdemeanor as the result of a sweeping public corruption investigation that also resulted in criminal charges against his predecessor, Mark Shurtleff. Prosecutors dropped one count of failure to disclose a conflict of interest against Swallow in the latest filing.

Utah Attorney General John Swallow formally entered pleas of not guilty Monday to each of the 14 criminal counts he faces in the corruption and bribery scandal that forced him from office in 2013.

If convicted, the former Republican officeholder could face up to 30 years in prison.

Outside the Salt Lake City courtroom after his arraignment, Swallow declined any comment, saying he’d been told by his attorneys “not to say anything. In June, Swallow waived an evidence hearing in the case, deciding to push the proceedings forward rather than let a judge decide if Salt Lake County prosecutors had sufficient evidence to take the case to trial.

“We can’t put up any evidence that would do us any good during a preliminary hearing,” his attorney Stephen McCaughey said last month. “This way, we’ll be able to present the whole thing to a jury.”

Days later, Swallow’s former co-defendant and predecessor, Mark Shurtleff, also waived an evidence hearing in his own case and entered not guilty pleas to a reduced number of charges: five felonies and two misdemeanors.

Those charges include counts of accepting prohibited gifts, obstruction of justice, official misconduct and bribery to dismiss a criminal proceeding.

Shurtleff, 57, also faces a prison term of up to 30 years if convicted.

Prosecutors have filed a new charge against former Utah Attorney General John Swallow, adding a money laundering charge to the list of criminal offenses he is facing.

The charge, filed in Salt Lake City’s 3rd District Court, came the same day that prosecutors released their witness list for Swallow’s upcoming preliminary hearing. It’s a long list of people caught up in the scandal surrounding the Utah Attorney General’s Office — including people who have accused him of soliciting gifts and donations while they faced investigation.

Swallow is slated to face a preliminary hearing, where a judge will decide if there is enough evidence to make him stand trial. That hearing is scheduled to begin June 8. Swallow and his predecessor, Mark Shurtleff, are facing criminal charges accusing them of bribery and corruption. Swallow resigned from office in 2013.