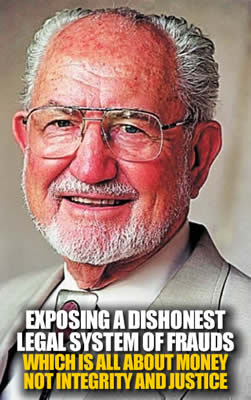 Justice John F. Molloy Exposes the
“THE FRATERNITY “- THE CORRUPTION OF THE LEGAL SYSTEM EXPOSED BY A JUDGE

Judges and lawyers often rot in bed when cancer or illeness finally take their toll on them due to their rotten cores. They sold out to crime, perjury and fraud pretending all their lives to be honorable yet nothing even similar. Their frauds living a life of lies. Looking only at lining their pockets and yielding power over the weak and defensless. Karma often takes it’s toll on their families and loved ones with swift revenge. The deserve it and should suffer in hell.

“The once honorable profession of law now fully functions as a bottom-line business, driven by greed and the pursuit of power and wealth, even shaping the laws of the United States outside the elected Congress and state legislatures.”

When I began practicing law in 1946, justice was much simpler. I joined a small Tucson practice at a salary of $250 a month, excellent compensation for a beginning lawyer. There was no paralegal staff or expensive artwork on the walls. In those days, the judicial system was straightforward and efficient. Decisions were handed down by judges who applied the law as outlined by the Constitution and state legislatures. Cases went to trial in a month or two, not years. In the courtroom, the focus was on uncovering and determining truth and fact.

I charged clients by what I was able to accomplish for them. The clock did not start ticking the minute they walked through the door.

The legal profession has evolved dramatically during my 87 years. I am a second-generation lawyer from an Irish immigrant family that settled in Yuma. My father, who passed the Bar with a fifth-grade education, ended up arguing a case before the U.S. Supreme Court during his career.

The law changed dramatically during my years in the profession. For example, when I accepted my first appointment as a Pima County judge in 1957, I saw that lawyers expected me to act more as a referee than a judge. The county court I presided over resembled a gladiator arena, with dueling lawyers jockeying for points and one-upping each other with calculated and ingenuous briefs.