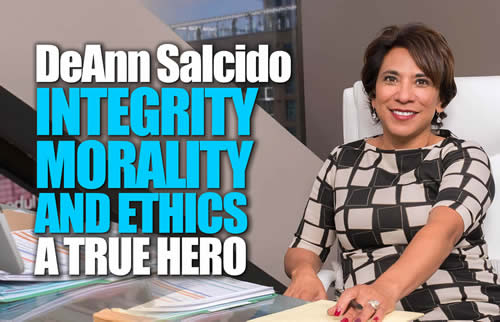 Judge Deann Salcido a True Hero for Justice
The former Judge Deann Salcido is a retired California Superior Court Judge and founder and CEO of Judicial Action Watch Society (JAWS). She is still practicing law at her law firm called Honorable Legal Services with one partner

FULL BIO
Judge DeAnn Salcido is a Superior Court Judge and former prosecutor with more than two decades of legal experience. Judge Salcido also strives to be active in professional and community organizations that are dedicated to improving the lives of others.

As a deputy district attorney in San Diego County, Salcido was a member of the trial team responsible for the prosecution of all types of trials, including felonies and misdemeanors, in the juvenile delinquency system. In Los Angeles County she prosecuted approximately 200 Juvenile Delinquency Petitions with cases ranging in severity from shoplifting to rape to attempted murder.

Judge Salcido is currently assigned to Criminal Court where she participates in Drug Court and handles criminal cases at the pre-trial stage. The majority of these cases involve domestic violence, drugs and alcohol.

In 2000, she became the first Latina to serve as President of the Lawyers Club of San Diego, an organization with over 1000 members whose mission is to improve the lives of women in the law and in society.

Judge Salcido is a 1983 graduate of the University of California at San Diego and was appointed by Chancellor Robert Dynes in 1999 to UCSD’s Board of Overseers. She is also a founding member of the UCSD Hispanic Scholarship Council, an organization that has raised hundreds of thousands of dollars for student scholarships. For these efforts, Judge Salcido received a Distinguished Service Award from the UCSD Alumni Association in 2002.

Judge Salcido received her Juris Doctor degree in 1989 from the University of California, Los Angeles School of Law.

Judge Salcido welcomes invitations to speak to schoolchildren about the importance and power of obtaining a good education. Judge Salcido hopes her two sons will some day come to share in her belief that one person can make a difference. She currently handles criminal cases at the pre-trial stage. The majority of these cases involve domestic violence, drugs and alcohol. More HERE

DeAnn Salcido has her own legal practive at Honorable Legal Services

DeAnn Salcido was born and raised in San Diego, CA. She is a second-generation trial attorney having followed in the footsteps of her father, Richard R. Castillo. Indeed she decided in elementary school that she wanted to be a lawyer. After watching the film “Kramer vs. Kramer” DeAnn changed her career goal and decided she wanted to become a judge. At age 30 she placed herself on a ten-year plan to become a judge and accomplished that goal at age 37, which in retrospect she now believes was too young.

While studying law at UCLA DeAnn was a semi-finalist in a National Moot Court Competition. In her final year of law school she was selected to intern for one semester for a federal judge, the Honorable James Ideman. That year she was also elected President of the Student Body Association for the law school. This followed her term as President of the La Raza Law Students Association during her second year of law school.

From 1995 until 2000 she returned to San Diego and worked as a civil litigator. Her areas of practice were employment law, environmental law and personal injury. She typically defended corporate clients such as Bank of America, Chevron and San Diego Transit Corporation. However, while the pay was good DeAnn did not care to put her law degree to work on behalf of corporations for the rest of her career. She knew that her passion was in fighting on behalf of people, not corporations. Hence she took a pay cut and returned to her first career as a criminal prosecutor for the County of San Diego. It was while she was a Deputy District Attorney for San Diego and the President of Lawyers Club of Diego that she was invited to apply to the bench by a representative from the Governor Gray Davis’ office.

In October 2002 DeAnn achieved her dream of becoming a Superior Court Judge when she received the call that the Governor had appointed her to the bench. She was first assigned to Family Court (Jan. 2003- Jan. 2006) and then Criminal Court (Jan. 2006 – Nov. 2010). In May 2010 Judge Salcido became the first sitting whistleblower judge in the United States after she discovered a chronic pattern of placing politics over citizen safety. Soon thereafter the workplace in San Diego Superior Court became a hostile environment. She was forced to resign as a judge after the stress of the hostile environment took a toll on her health and she no longer desired to fight to keep a job she had grown disenchanted with.

She resumed the practice of law in 2011. The motto of her law firm is “restoring honor to the courts and protecting families.” She is now also a tireless advocate for court reform, especially in the family court arena. She speaks nationally on television and radio and film documentaries about the pervasive problems in family court that exist for those unwitting citizens. She has no regrets about becoming a whistleblower judge and is proud to report that she continues to achieve great success in court for her clients.

Not one to ever be stopped from enjoying life, she is “happily divorced” and the mother of two grown sons. Each of her two sons was raised to believe in the “power of one” and the difference that one committed person with a strong work ethic can make in the world. MORE HERE