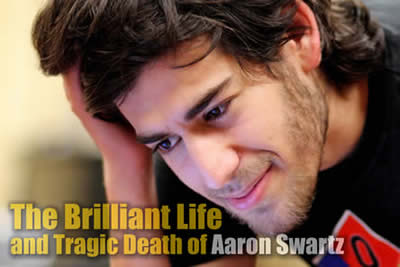 He was a child prodigy, an Internet pioneer and an activist who refused to back down – even when the feds tried to break him

At 26 years old, Aaron Swartz had established himself as a singular force bridging the worlds of technology and activism – a young man driven by a restless curiosity and the belief that information was the most valuable of currencies, a form of wealth no one should be deprived of. As a teen programming prodigy, he had helped to develop RSS, the now-ubiquitous tool allowing users to self-syndicate information online, and at 19 he was one of the builders of Reddit, the social news site that was purchased by Condé Nast, which turned Swartz into a millionaire before he could legally order a beer. Since then he had become a tireless and innovative advocate for a number of causes related to politics and the power of unfettered connectivity. In 2011, for instance, he successfully led a campaign to prevent the Stop Online Piracy Act (SOPA), a bill introduced to Congress that would have effectively legalized censorship on the Internet.

On January 10th, the day after the activist conference in upstate New York, Swartz was in good spirits. “Surprise!” he shouted early that evening, when Stinebrickner-Kauffman returned home, expecting him to be out. Swartz was animated, eager to head into Manhattan, where a friend was celebrating a birthday party. Swartz was talkative, engaged, not the least bit withdrawn. The bar served macaroni and cheese and grilled cheese, his favorite foods, and Swartz remarked about how the sandwich was among the best he’d ever had.

However, the next morning, Friday, January 11th, Swartz’s mood took a drastic turn. He would not get out of bed, despite Stinebrickner-Kauffman’s best efforts. “I was shaking and pouring water on him, but he just wouldn’t move,” she says. Eventually, he got dressed, though he decided not to go into the downtown Manhattan office he worked out of. Believing the worst was over, Stinebrickner-Kauffman went to work, messaging friends that she was worried about Swartz, and asking that they stay in contact with him throughout the day. That evening, the two had plans to have dinner with Wikler, but when she arrived in Crown Heights to pick up Swartz, she found his body, hanging from a belt.

This film follows the story of programming prodigy and information activist Aaron Swartz. From Swartz’s help in the development of the basic internet protocol RSS to his co-founding of Reddit, his fingerprints are all over the internet. But it was Swartz’s groundbreaking work in social justice and political organizing combined with his aggressive approach to information access that ensnared him in a two-year legal nightmare. It was a battle that ended with the taking of his own life at the age of 26. Aaron’s story touched a nerve with people far beyond the online communities in which he was a celebrity. This film is a personal story about what we lose when we are tone deaf about technology and its relationship to our civil liberties.