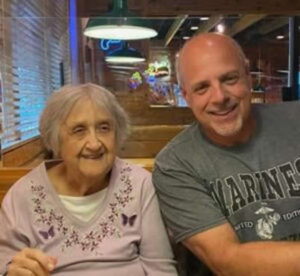 Veteran Hayes said he will also be encouraging other Military Veterans to Vote “NO,” for Lisa McClain, during her upcoming Congressional Reelection Campaign.

Moffatt Media: Randy, why are you voting “NO” for Lisa McClain Congressional Rep.?
Randy Hayes: I reached out to McClain’s Michigan and Washington DC Congressional Offices. Because I was asking for Veterans Assistance and was told that their offices weren’t able to help me even though I am a Military Veteran and live in her district.

I was only asking for Lisa McClain, Congressional Rep. to make a Congressional Inquiry to assist me with Visiting my Mother (Betty Hayes). Since the Michigan Wayne County Probate Court, is causing Age Discrimination against my Mother.

My Mother is a protected class member under the Older Americans Act. From what I have learned the Michigan Probate Court can’t discriminate against my Mother, who is age 87, while in receipt of Federal monies.

Now back to Congressional Rep. McClain, all I wanted from her was to assist me as a Veteran, but both her Michigan and Washington D.C. offices claimed they couldn’t help me!

I have no criminal record and I have never been arrested. Again, how hard would it be for Congressional Rep. McClain to even make a simple telephone call to the Court, regarding visitations with my mother?

Moffatt Media: Randy, what military branch did you serve in?
Randy Hayes: I served in the Marine Corps Reserve from 1982-1988 and I missed Desert Storm. From 1992-1995, I was in the Navy Seabees.

Moffatt Media: Randy why did you join the military?
Randy Hayes: I wanted to serve my country and be the best.

Moffatt Media: What age were you when you joined the Military?
Randy Hayes: 18

Moffatt Media: Randy you mentioned that you will be encouraging other Military Veterans to VOTE NO for Congressional Rep. McClain, what steps are you taking to spread the word, vote no on McClain?
Randy Hayes: I am a member of The American Legion, Post 351, Member of The Marine Corps League and I have over 2,000 friends on Facebook, who are mostly military veterans, that I will encourage them to VOTE NO for Ms. McClain.

Moffatt Media: Randy do you have any final words?
Randy Hayes: I have in the past supported Congressional Rep. McClain and listened to too many of her speeches. Now I will gladly go to Ms. McClain’s opponents to discuss how she has no regard for supporting Veterans. Because Ms. McClain has the power to assist me and my mother with a simple telephone call due to the outrageous actions by the Wayne County Probate Court.

It’s time to stand up for those that have lost their “Elder Rights” by the Michigan Wayne County Probate Court.

Last Updated on 7 months by admin