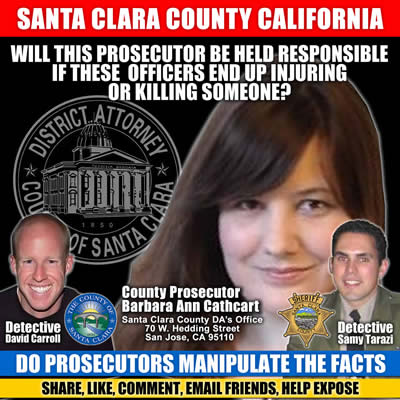 Think prosecutors don’t lie or manipulate the facts? READ THIS STORY
The story proves how out of control the lying and dishonesty by police and courts has gotten.

New California Law Cracks Down On Cheating Prosecutors
How prosecutors covered up crimes
A study of California prosecutors finds a lack of diversity
Judge disqualifies all 250 prosecutors in Orange County, CA because of widespread corruption
California Prosecutor Falsifies Transcript of Confession

“When will they ever learn? Ninth Circuit Judge Alex Kozinski declared months ago in a much-quoted opinion that there is “an epidemic of Brady violations abroad in the land.” And yet, prosecutors continue to deny there’s a problem. Indeed, the Department of Justice gets outright indignant at the suggestion, and so do many state court prosecutors. They bristle at the very mention of the possibility.”

As a former Police Officer the public must be informed how easy it is for our courts, police and government to terrorize, abuse and frame innocent people. Courts most often will believe a dishonest public servant over an innocent citizen. Even when evidence and documentation support them police, prosecutors, government and judges have the upper hand. Often spending months incarcerated without a trial, bail or attorney. Yet when police or government servants are exposed for crimes and murder they receive paid leave and tax payer legal support.

The game is for police NOT to be liable or guilty they must claim you’re at fault so first they destroy your character. Often this is done via the media where they release fabricated negative information.

Prosecutors work hand in hand with police so they don’t want to upset that relationship and will stand behind police even if guilty. In the case of Henry Sires  the jury said this”

“Ultimately, the officer was not consistent with his statements, and they had no physical evidence to prove the allegations. “

Not being consistent often means dishonesty and guilt, yet wearing that uniform and shinny badge. Jury members often believe an image they have ingrained of who a police officer is, instead of facts and the truth.

The case against Henry Sires is a perfect example how evidence proves he’s innocent yet prosecutors continue to victimize Sires and his family. To the point of twisting the facts and using manipulated testimony from tainted police. Perjury means nothing when police falsify their reports. While there are thousands of cases of police committing perjury its rare to never the court prosecutes them.

What did Barbara Ann Cathcart have to say about the victim Henry Sires:
She argued that “a tall man is visible” referring to Deputy Vandergraff and he should have been seen by Henry Sires. However, she did not consider that the same was true for Henry Sires, yet Vandergraff failed to see him too.  She argued that Deputy Vandergraff lack of memory was due to the traumatic event he experienced. At one point she said, “All the incidents that have happened throughout the nation do not matter.” The DA raised her voice as she spoke about Henry in a demeaning way, accusing him of being a liar. These depictions made his Mrs. Sires, who has sat through every court date, cry.

Barbara Ann Cathcart provided no evidence or supporting images to support her rant. In her effort to remove any accountability for a public servant who obviously did wrong and almost murdered an innocent man.

Traumatic event? Vandergraff is paid to be in the line of duty and got paid leave. The real victim Henry Sires is the only person who WAS SHOT and almost died, he’s the one who was traumatized.

“All the incidents that have happened throughout the nation do not matter.” Barbara Ann Cathcart do you mean Walter Scott who was shot in the back? Or the 1208 people who were killed by police in 2015 alone don’t matter?

They do matter America, people are being murdered and it’s people like Barbara Ann Cathcart who help problem cops get away with their crimes and abuse. It’s courts like Santa Clara County where perjury by police is ignored. Where there are two classes. Those (the general public) who are forced to obey or else and those who are “above the law” ie. Police, judges, lawyers and government.

Don’t think police, judges and government can terrorize an innocent person?
Think again, Police often make up lies to get arrest and search warrants. After all who’s going to prosecute them for such crimes? The first thing they’ll do is have you arrested and jailed. You may lose your home, job and reputation while locked away for what can be months. You’re forced to pay over $250 an hour for a decent attorney who can afford to go up against a court that is paid by your tax dollars to destroy your life.

It’s never been about innocent till proven guilty, it’s always been guilty as accused and then it’s your responsibility to clear your name. However after months or years of abuse people will believe the police. In fact even if never convicted you’ll have a record due to that investigation which will come up any time a background is done.  I’m telling you this from actual experience where a dishonest judge, lawyer and criminal filed a false police report. Police acted on lies not the facts and when it was found what they were told was not fact or true they did nothing.
See my story HERE

But defense attorney Avi Singh argued that ballistics reports indicate Vandegraaf was on the passenger side of Sires’ car when he fired, not in the pathway of the car, which was going less than 5 mph.

“A car driving by is not an assault,” Singh said. “What the deputy did was super-dangerous.”

WHAT REALLY HAPPENED  TO HENRY SIRES AND WHY HE WAS NOT CONVICTED:
Henry’s attorney explains it by showing a photo of the view from the mountainside where Henry was shot. It was the serene view that brought Henry to that road on that fateful day. Then the attorney showed the picture of Henry in a hospital bed, bloody from the bullet shot by sheriff Vandergraff.

Henry’s attorney used physical evidence to prove his arguments. He displayed a photo of Henry’s car that showed the gun shots being fired into the side, showing that Henry’s call could not have been facing directly at the officer. He used the bullet trajectories photos, even those initially presented by the prosecutor, to demonstrate the direction of the bullets.

And he discussed how Deputy Vandergraff, in the end, used lethal force for an illegal parking situation. He pointed out that Vandergraff’s excessive use of force placed even placed Deputy Randall and the civilians at the scene in danger. He asked the jury to reject the DA’s argument that Henry was a liar and asked them to apply the same principle she requested for Vandergraff’s given that Henry was also in a traumatic event, especially after being shot in his hand.

Henry’s attorney also stated how Deputy Vandergraff contradicted himself and in fact corroborated Henry’s testimony. The notion that Henry’s car posed a threat to Vandergraff just wasn’t not supported by science and facts. According to experts, the car was going less than five miles per hour.

Prosecutor Barbara Ann Cathcart is now terrorizing and abusing Cary-Andrew Crittenden. Crittenden has no rights, and has already spent 258 days in jail without a trial or affordable bail. All on the word of one officer who appears to have lied, had a hidden agenda or tie to a dishonest judge.

Prosecutor Barbara Ann Cathcart contended that Vandegraaf moved and shot in self-defense at the same time, as the vehicle continued to come towards him down the roadway. There is no video of the scene because the officers hadn’t turned on their dash-mounted cameras. (Why was this not done?)

“We have seen throughout the country that there are bad police shootings,” the prosecutor said outside the courtroom. “But there are a lot of police shootings that are justified, especially when an officer is in fear for his life, including this one.”

We’ve also seen countless times when there was no danger and officers claimed they feared for their lives only to use this as a defense to get away with murder.

“In light of what’s happening in the country right now, taking the officer’s word for it doesn’t seem good enough,” Singh said. “To police officers who unlawfully use force, the message is, ‘Don’t worry, we have your back.’ To victims of unlawful force, the message is, ‘The rule of law doesn’t protect you and your lives don’t matter.’”

Vandegraaf indicated race wasn’t a factor in the shooting: he told investigators he didn’t realize Sires was black, either because of the angle of the sun or some other unspecified obstruction. However, he did see Sires’ two black female friends talking to Randall.

Barbara Ann Cathcart, however, said the ballistics do not show that Vandegraaf was on the passenger side of Sires’ vehicle when he fired the first shots. Singh also contends that Sires was driving only 1-3 mph, based on a defense expert’s analysis of the sheriff’s report.

“We’re not saying he’s a bad officer, we’re saying he made a mistake and panicked, and that the shooting wasn’t a good shooting,” Singh said. He also added that he believes the prosecution’s decision to charge Sires sends a disturbing message, alluding to protests nationwide over deadly encounters between cops and mostly black suspects in the past year.

It’s gotten so bad a law was passed but who will enforce it?

When are courts do all they can to convict innocent people while they ignore police who murder innocent, unarmed citizens.

SAN JOSE — Less than 24 hours after a San Jose police officer was shot to death this spring by a troubled gunman, a Santa Clara County sheriff’s deputy in an unrelated incident blasted six bullets at a man he said tried to mow him down with a green Oldsmobile in the hills above East San Jose.

San Jose cop Michael Johnson’s tragic death overshadowed news of the deputy shooting of the Oldsmobile driver, which was not fatal. But this week, the incident resurfaced in a Santa Clara County courtroom in a case that embodies both the safety concerns of law enforcement that suspects are increasingly prone to attack them, and of minority residents who feel cops disproportionately subject them to deadly force.

The Oldsmobile driver, Henry Sires, who is black, survived the March 25 shooting with only one bullet wound in the palm of his left hand. Thursday, Santa Clara County Superior Court Judge Ronald I. Toff ordered Sires to stand trial on charges that he assaulted sheriff’s Deputy Steven Vandegraaf with a deadly weapon — his car. The deputy, who is white, was not injured. But in California, Sires, 33, could be convicted if the prosecution proves he deliberately took an action that could have harmed the officer.

The case comes as scrutiny of officer-involved shootings intensifies nationally amid a rash of deadly encounters, including eight clashes between cops and suspects in the Bay Area since a Hayward police officer was killed a month ago during a traffic stop.

What should happen to these prosecutors who abuse our courts?Suing for Damages: Malicious Prosecution in a Criminal Case