By Jose Hernandez Facebook, Government, How to Expose them, Judges, Lawyers, Police, Uncategorized, Victims, Who is UGLY, Who to Report them to

FACT: Some Judges can and will commit crimes, the problem is exposing them and getting them prosecuted. When someone exposes a judge the first thing they do is attack the person who reports them. Police often side with the judge because they can’t be objective due to working under that judge. This allows unethical judges to commit crimes, abuse victims and stay immune to prosecution.

Mark Arthur Ciavarella Jr. is a convicted felon and former President Judge of the Luzerne County Court of Common Pleas in Wilkes-Barre, Pennsylvania who committed, along with fellow judge Michael Conahan, the “Kids for cash” scandal in 2008
See this story
http://topics.nytimes.com/topics/reference/timestopics/people/c/mark_a_ciavarella/index.html

The problem with bringing Ciavarella to justice was getting police who protected the judge to accept the crimes and be objective. Now another unethical judge has been exposed and is avoiding prosecution.

The crimes and abuse also include the Santa Clara County Public Guardian who is entrusted with the lives and life savings of senior citizens. When the crimes and abuse were reported to them nothing was done and the events where ignored.

The district attorney and lawyers and police all have failed to investigate and instead are covering up evidence and attempting to stop those who are coming forward.

Efforts to bring the evidence to the public hindered by judge who claims he is being terrorissed
https://sites.google.com/site/socratesmanoukian/

PROBLEM:
Sheriff Department is being mis-led by the judge who claims he’s the victim, the judge is abusing his power by influencing the authorities to stop any investigation and aide for the real victims.

PLEASE SHARE THE IMAGE AND THE ATTACHED INFORMATION, The only way to stop unethical judges who abuse citizens, law and our constitution is to EXPOSE THEM AND THEIR CRIMES TO THE NATION 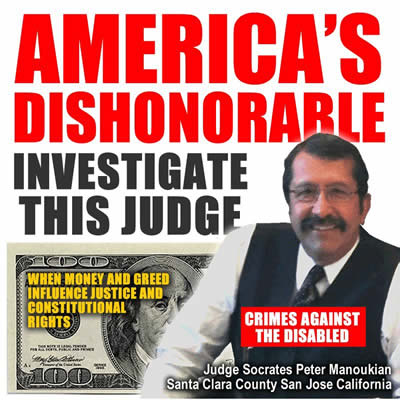