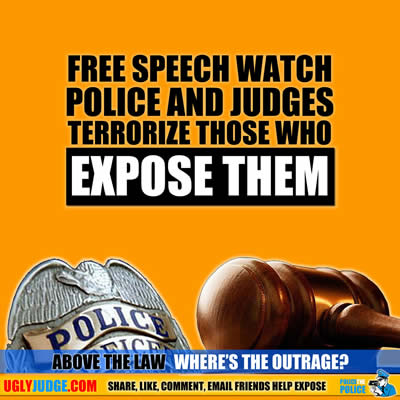 What do dishonest Police or Judges do when exposed? They attempt to discredit anyone who reports their crimes or murder. Often with more lies, violations of rights and even so far as jail. Whistle blowers have a history of being attacked, terrorized and even jailed as a result of just “doing the right thing”.

Government agencies like Department of Justice or the FBI should be protecting and serving these people to help rid our country of such villains and criminals instead they do nothing and allow them to get away with it.

Good Cop Down The reality of being a police whistleblower

Police whistleblower complaint raises questions about department’s seizures
A whistleblower complaint filed by Lt. Joe Walker last November against his supervisor, Investigations Capt. Eric Olsen, alleges Olsen minimized or covered up the seizure instead of promptly returning the cash, a claim Olsen said is absolutely untrue. A city investigation into the complaint, conducted by independent attorney Thomas McLane, found Olsen did nothing wrong, though it did not rule on whether the search was legal.

Baltimore Police Whistleblower Michael Wood on Justice Reform: ‘This Is a Revolution’ On June 24, Michael A. Wood Jr. was working on his yard with his wife when he just had it with the cops.

Wood isn’t a criminal, and he’s not one of those right wing survivalists who equates law enforcement with tyranny: In fact, the 35-year-old is a retired Baltimore Police Department sergeant. Wood says he saw extensive wrongdoing during his 11 years on the force, and he alleges the BPD abide by a “blue wall of silence.” That is, BPD members won’t come forward to report wrongdoing or testify against one another. They’ll back each other up no matter what, says Wood.

Police “Whistleblowers” and the First Amendment
August 22, 2013, the Ninth Circuit U.S. Court of Appeals, in a unanimous en banc decision (11-0), held, in Dahlia v. Rodriguez, that officers may have First Amendment protection against employer retaliation when speaking out about alleged department misconduct and corruption.

The en banc panel overruled earlier decisions by a district court judge and a three-judge panel ruling that City of Burbank, California, detective Angelo Dahlia’s disclosure of officer misconduct was not protected by the First Amendment. The three-judge panel held that “Dahlia’s disclosure to the Los Angeles Sheriff’s Department (LASD) of his fellow officers’ misconduct was not subject to First Amendment protection because he had a professional duty, as a matter of California case law, to report misconduct. The district court also held that Dahlia’s placement on administrative leave did not constitute an ‘adverse employment action

Whistleblower Cop Says the Police Academy is “Infected,” Teaching Cadets there’s a “War on Cops” The police have been at war with the general population for generations, killing innocent people, locking them in cages and taking their hard earned money every opportunity that they get. However, now that people are finally starting to resist this oppression and are finally speaking out, police are beginning to act as if they are some sort of persecuted minority, who now have even more reason to “fear for their lives” and be even more aggressive with the public.

Despite the fact that police are typically the aggressors, police departments and unions are set on painting themselves as the victims while they terrorize innocent people. The “war on cops” myth is now even being taught at police academies, according to whistleblower and Iraq war veteran who goes by the pseudonym of Clayton Jenkins.

The $1,479,883 price tag included the settlement paid to former police department employee Kelly O’Haire plus the 3,030 hours spent on the case by city attorneys, according to records obtained by the San Francisco Examiner.

O’Haire and her lawyers were paid $725,000 Aug. 14 as part of the settlement. The settlement, which mandated the suit be dropped, also included language saying “neither party will disparage the other (including making unflattering remarks or portraying the other in a negative light).”

O’Haire also agreed to hand over all documents she still had related to personnel matters at the San Francisco Police Department.

O’Haire’s lawsuit claimed she was fired in 2011 by Suhr in retaliation for her investigation into his alleged record of misconduct. At the time O’Haire, a former police officer, was working for the police department as a lawyer looking into police misconduct cases.

Her lawsuit was filed in 2014 and included revealing snippets from a deposition by District Attorney George Gascon in which he said he told Mayor Ed Lee that O’Haire was unfairly fired, and the mayor did nothing.

“As long as we protect our own, who cares about what’s right,” Wood says of this mentality.