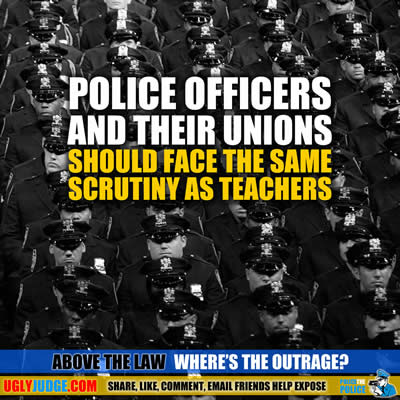 Police Officers and their Unions should Face the Same Scrutiny as Teachers
Be sure to read this excellent story on yet another reason why Police are out of control in America. HERE

More info on Police Unions
How Police Unions and Arbitrators Keep Abusive Cops on the Street
Officers fired for misconduct often appeal the decision and get reinstated by obscure judges in secretive proceedings.

Why We Can’t Support Police Unions
A labor movement that seeks to fight oppression has no room for police unions.

The Bad Kind of Unionism
When police unions have widened their gaze beyond issues like compensation and working conditions, it’s been almost exclusively to conservative ends.

Our Police Union Problem
FOR decades now, conservatives have pressed the case that public sector unions do not serve the common good.

Recent events suggest Republicans have given them a pass for far too long
South Carolina Cops Not Entitled To Workers’ Comp If They Are Traumatized By Killing Someone
Ugly Facebook Post From The Police Union In Columbia, Missouri
Undue Influence: the power of Police and Prison Guards’ Unions

Why We Need Independent Prosecutors