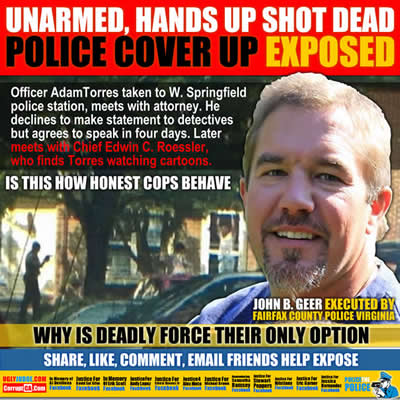 John B. Geer unarmed was executed by Fairfax County Virginia Police Officer Adam Torres. Not only has a huge cover up been exposed but information coming out exposes the “nut case” cops we hire and give deadly force to.
Not only did this dishonest Police officer lawyer up right away he was not truthful and did not cooperate.

“Torres is taken to West Springfield police station, meets with attorney. He declines to make statement to detectives then but agrees to speak in four days. Later meets with Chief Edwin C. Roessler, who finds Torres watching cartoons.”

John B. Geer had hands up when shot by police, four officers say in documents
Fairfax prosecutor says Fairfax police blocked his probe of John Geer killing
Timeline: Events leading up to John B. Geer’s shooting 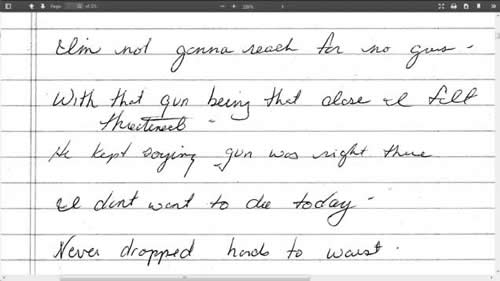 Fairfax County prosecutor Raymond F. Morrogh said police repeatedly refused to provide internal affairs records of the Fairfax police officer who shot and killed a Springfield John B. Geer in 2013, and county officials vowed to put up a fight should he try to seek them through court action.

The revelations came in a letter Morrogh sent on Friday to Sen. Charles Grassley (R-Iowa) after the senator last week asked the county prosecutor about his actions in the case and whether Fairfax police had cooperated with him. Morrogh said he referred the case to the U.S. attorney in Alexandria in January because he “was convinced that the public could not have complete confidence in an investigation where one arm of the police department was cooperating with the prosecutor while the Chief and Internal Affairs Section along with the Office of the County Attorney were seeking to withhold information, albeit for reasons which they believed entitled them to do so.”

The crime being the excuse “We’re investigating ourselves” as a way to delay and allow people to forget. Thank god someone video taped the event as otherwise government and police as they’ve done in the past will lie, cheat and manipulate the facts to avoid law suits and accountability. Think about it, if non-government approved people did what they did they’d be labeled a criminal. It’s called rationalizing murder and “legal killing”. The only difference they use a lawyer in a black robe called a judge who deems it “Acceptable”. Funny how when its law, killing is ok but when you do it to them its “against the law”. This is equality in America today. Crime should depend on the act, however in America it depends on who is doing it. Government can kill people and they do, its called war. Police can kill pets, women and children, they get away with it because they’re on the side of law and held ABOVE THE LAW.

News footage of the event when it took place