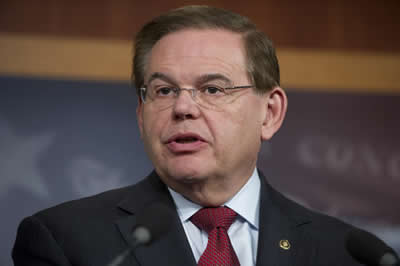 U.S. Senator Robert Menendez of New Jersey was indicted this week on charges of accepting nearly a million dollars in gifts and campaign contributions from a long-time friend in exchange for political favors.

Menendez, the second sitting U.S. Senator to be indicted in the last decade

The indictment of Senator Menendez challenges everything about ‘Citizens United’

A disturbing set of facts that call into question the court’s logic and conclusions about corruption. The April 1 indictment of Sen. Robert Menendez on bribery charges alleges a chronology that should worry everyone who cares about integrity in national politics. According to the indictment, a wealthy Florida ophthalmologist, Salomon Melgen, who was seeking Robert Menendez’s support on matters before the U.S. government, wrote two checks for $300,000 each in 2012 to the Senate Majority PAC, a super PAC devoted to supporting the election of Senate Democrats.

“It’s not just the New Jersey Democrat’s 14-count indictment on corruption charges, though that’s plenty. As bad is the appalling way in which he responded: with a political rally to kick off a campaign against the Justice Department in which Robert Menendez plays the persecuted minority.

“Menendez called his event Wednesday night in Newark a ‘press conference,’ but it was no such thing. He took no questions, instead reading a combative statement that claimed the Justice Department — a Democratic administration’s Justice Department — was doing the bidding of ‘those who have a political motive to silence me.’”