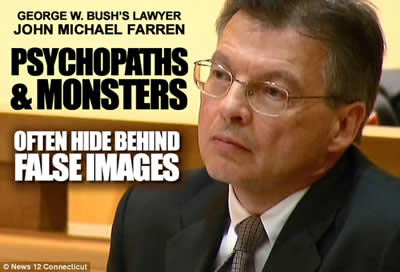 John Michael Farren is a prime example how easy it is for a sociopath to get into a position of control. The problem then is exposing them and getting people to believe that the image they hide behind is false. We see this often with judges and police where a small percentage of them are indeed evil people yet government does not want to accept the truth. How many people need to be victimized, terrorized or even murdered by these monsters who infect our world?

A prominent attorney John Michael Farren who worked in both Bush administrations pleaded not guilty Thursday morning to charges he tried to kill his wife with a flashlight and strangle her in their New Canaan home because she wanted a divorce.

John Michael Farren’s wife had served her husband with divorce papers two days before the attack, citing his explosive temper, she told police.

Riccio would not comment on his client’s condition to a waiting pool of reporters following the hearing. A judge told John Michael Farren if he wished to post bail, he must do so at the Stamford courthouse and must pay for a GPS monitoring device himself. Though incarcerated, John Michael Farren is prohibited from contacting any of his wife’s family, court papers said.

The not-guilty pleas allow the case to move forward in court and allow both sides to negotiate a possible resolution before the case must go to trial. A pre-trial conference with prosecutors, defense lawyers and attorneys for the victim, John Michael Farren’s 43-year-old wife, is set for Feb. 16, said Eugene Riccio, the lawyer representing John Michael Farren.

John Michael Farren was being held in lieu of a $2 million bond at the Garner Correctional Institution in Newtown, a high-security facility.

New Canaan police arrested John Michael Farren on Jan. 6 and charged John Michael Farren with beating his wife unconscious with a flashlight. The attack left her with a broken jaw, facial fractures and lacerations to the back of her head. Afterwards, she was able regain consciousness and hit a panic alarm at the house. She escaped with the couple’s two young daughters to a neighbor’s house after John Michael Farren threatened to slit his wrists with a kitchen knife, a police report said.

A six-member jury in Stamford, Connecticut, convicted John Michael Farren, 61, on Friday after little more than a day of deliberations, report the Stamford Advocate, the Associated Press and the New Canaan Advertiser. John Michael Farren was convicted in the January 2010 flashlight beating of his then wife, Mary Margaret Farren, after she had served him with divorce papers.

The defense called no witnesses, but argued John Michael Farren didn’t attempt to kill his wife because he let her escape, and didn’t use either of two guns or a samurai sword kept in the home, according to the New Canaan Advertiser.

20/20 on ID Love You To Death 2 Cases, A Wife and Fiancé Attempted Murders