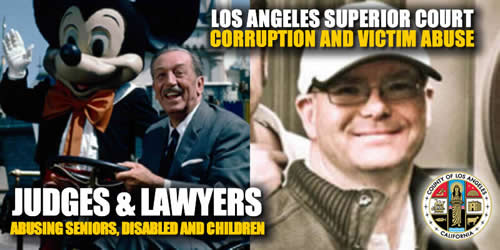 For those who have not been following along with this story, Judge Cowan recently claimed Lund had Down Syndrome from the bench, even after being presented with DNA evidence proving the opposite. The judge also ruled Lund to be “unfit” to receive his $200 million inheritance from Walt Disney and appointed him a temporary guardian to make all of his legal decisions, all without a hearing, and now Davis and his team of lawyers are trying to fight back against the rogue rulings of the legal authority.

Typical Los Angeles Superior Court Corruption by Public Servants who swore to an oath but rule in favor of bribery and dishonesty.

The Walt Disney Company has come a long way since it was founded by brothers Walt and Roy O. Disney nearly a century ago. What began as a cartoon studio is now a media powerhouse, complete with amusement parks and properties.

But for all its success, the family behind “The Happiest Place on Earth” has largely stayed out of the limelight and the business. While it’s not known just how much the family is worth, GOBankingRates estimated the company’s net worth to be $130 billion. Roy O.’s grandson, Roy P., previously said the family owns less than 3% of the company, but assuming it is about that amount would put their fortune around $3.9 billion (not counting any investments in addition to Disney holdings).

From a family-trust-fund feud to generous philanthropic endeavors, here’s a look at the three generations of the Disney family. 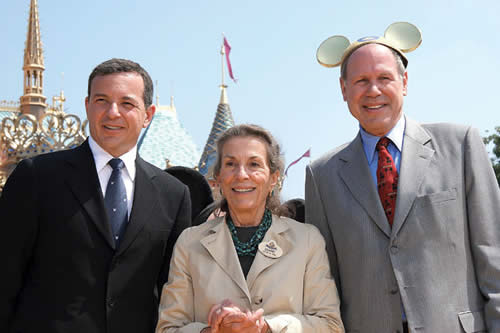 “We weren’t raised with the idea that this is a great man who is doing things that no one else had ever done,” Sharon had said. “He was Daddy. He was a man who went to work every morning and came home every night.”

Walt died in 1966 of lung cancer, leaving a network of trusts and family foundations for his family.

Walt’s other daughter and Sharon’s older sister, Diane, one of the three trustees in charge of the inheritance, with Robert Iger (left) and Michael Eisner.

By all accounts, Michelle, Brad, Bill and Sherry the Lund side of the Disney clan had gotten along well. After their mother, Sharon, died, Michelle and Brad took annual trips with Bill and Sherry to a Wyoming farm ranch and Hawaii. Together, the family bid on and bought Elton John’s “Candle in the Wind” original lyric sheet for $400,000 at an auction rad wielded the paddle and donated it to the Princess Diana Museum. All of the Lunds were committed to the Sharon Disney Lund Foundation, donating money to cancer research and visiting the scientists to personally view the results of their breakthroughs.

Victoria, the twins’ half sister from Sharon’s first marriage, was a different story. Victoria was said to live a disheveled existence, her hands blackened from heroin use. In her last years, Victoria would charter planes and splurge on $5,000-a-night suites at the Royal Palms apartment homes in Las Vegas. She once went on a Disney cruise ship and destroyed her suite in such spectacular fashion that Eisner, then-CEO of the company, had to call the trustees and make them pay for the damages. The family staged numerous interventions, to no avail.

Happiest Place on Earth? Disney Heiress Speaks Out Against Disneyland’s Abuse of Workers