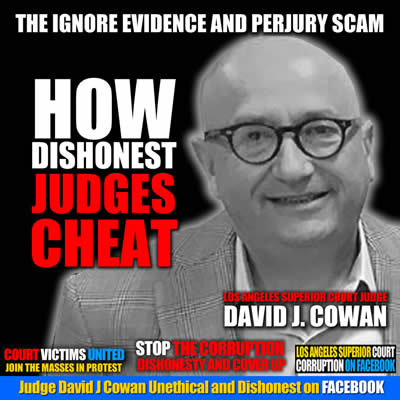 What needs to be investigated and exposed.
The small legal groups (gangs) of people involved in these questionable conservatorship/guardianship cases, same judges, lawyers and property companies who elect and assign each other. Often victims have no choice who represents them and can’t change that person should they feel violated or unfairly treated. There are Conservator rights and rules but the problem is the judge often ignore or don’t respect them. This often is the case with law and constitutional rights.

More victims of dishonesty and dishonorable judges for profit.

If you’re a victim of Judge David J. Cowan or know of a victim who has been “Legally Abused” please contact us as you may not be the only victim. Los Angeles Superior Court has an epidemic of Judicial corruption going on which is ignored by the Commission on Judicial Performance and the American Bar as well as the California bar. It’s been proven these judges accept bribes via property loans and dirty lawyers their in bed with.

Victims or anyone affected by this judge should contact us and join other Victims on Facebook at the following Facebook pages:
Judge David J Cowan, unethical and dishonest
Los Angeles Superior Court Corruption
Court Victims United

You should file a report (even if they ignore you) and document the abuse and fact that the CJP does not do their job.

David J. Cowan is a judge for the Superior Court of Los Angeles County in Los Angeles County, California. He was appointed to the court by Governor Jerry Brown on June 18, 2014, to fill the vacancy created by the retirement of Judge Diana M. Wheatley.

an attorney for Walt Disney grandson, Bradford D. Lund, announced another count added to their previously filed U.S. Civil Rights Act complaint against Superior Court Judge David J. Cowan and the entire Los Angeles County Superior Court. The new Count 6 alleges that Judge David J. Cowan and the LA Court violated an anti-discrimination law by Judge David J. Cowan making an “indisputably false” statement and “perception” — from the bench on the record, and specifically contradicted by a DNA test – that resulted in discrimination against Lund and his loss  of freedom regarding right to counsel and property rights without due process of law.

Not that the Redstone family drama this morning was limited to just relatives absent from the courtroom.

Before announcing his decision and with a trial looming early next year, the judge noted he had received a “late night email” from Gary Snyder, a purported cousin of Sumner Redstone, who alleges that the LA County District Attorney is investigating claims of elder abuse against the media mogul. “The District Attorney knows where to find me,” Judge Cowan told the courtroom of lawyers, declaring he will ignore the correspondence from Snyder.

In a dramatic turn worthy of this matter of many dramas, at the very end of today’s hearing, Snyder himself stood up in the back of the courtroom and revealed his presence. Addressing Judge Cowan and the others assembled, Snyder noted he was the only family member to even show up at such hearing and that his “email spoke for itself.” Judge Cowan recommended the low-key alleged cousin get himself a lawyer if he wants to return to court in the future.

Which just might the case come January when the trial starts, if it does. In the meantime, maybe Redstone can help get Britney back on Viacom owned MTV now that they appear to be sharing a new boss, so to speak

Update
Six years has passed since this father has laid eyes on his two defenseless children, his son Jazz, now 13, and his daughter, Maya, now 11, who have been kidnapped, are being emotionally, if not physically, abused daily, and will continue to be as long as no one is held accountable. Minor’s Cousel Amy L. Neiman, Attorney Roy L. Kight, judicial officers David J. Cowan and Bruce G. Iwasaki have all been complicit in furthering the heinous collusion that has, in effect, stripped a parent of his constitutional and parental rights without due process.

NEWS STORIES
Walt Disney grandson, Bradford D. Lund, announced another count added to their previously filed U.S. Civil Rights Act complaint against Superior Court Judge David J. Cowan and the entire Los Angeles County Superior Court. The new Count 6 alleges that Judge Cowan and the LA Court violated an anti-discrimination law by Judge Cowan making an “indisputably false” statement and “perception” — from the bench on the record, and specifically contradicted by a DNA test – that resulted in discrimination against Lund and his loss  of freedom regarding right to counsel and property rights without due process of law.

Sumner Redstone Goes “Toxic”: Britney Spears’ Lawyer To Be Mogul’s Guardian
“IT IS NOT A COINCIDENCE”: WITH $75 MILLION ON THE LINE, THE REDSTONE FAMILY DECLARES SUMNER INCOMPETENT

The Robing Room Negative reports on this Ugly Judge