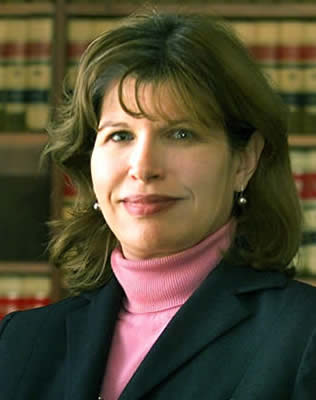 Judge Ana Maria Luna has braces, thick brown hair that she wears in a bob and a large, knotty gold-and-diamond wedding ring. She was 42 years old and pregnant at the time. Raised as a Roman Catholic by her mother and Mexican-American father, she converted to Judaism as an adult.

She understands that things aren’t always what they seem, and she brought that sensibility into drug court when she insisted on going beyond the simple personal history provided in a client’s paperwork.

“If it’s a woman, first-time offender, she’ll look at how a child, the family and a marriage is affected–social pressures that a man might not have to deal with during treatment,” said public defender Anna Armenta-Rigor.

In her own home, Luna and her husband are raising three teenage sons–one from her first marriage and two from his first marriage. She worries about the influence of rap music’s violent lyrics on the young men and about their exposure to alcohol, the substance that drug addicts invariably say was their gateway addiction.

An actual Review:
If you are a woman with a custody issue and Judge Luna is assigned to you, you need “AFFIDAVIT OF PREJUDICE PEREMPTORY CHALLENGE TO JUDICIAL OFFICER” (Code Civ. Proc., §170.6), to get your case switched to another judge. The form can be found online and no reason is needed just sign the form and serve on other party and file proof of service. Judge Luna favors men 100% and will give them 100% legal and physical custody or 50/50 custody even with very young babies even when the man is a sex addict and a liar. This judge will ignore impeachment evidence against men. The judge will accept hearsay and obvious perjury against a woman. If you are a woman with kids, 170.6 this judge before it is too late.

Comment #: CA31328
Rating:Not Rated
Comments:
This judge should not be anywhere near a family court. Biased toward fathers. Ignores facts and evidence. Disregards the law.

Comment #: CA31269
Rating:Not Rated
Comments:
Factual, negative comments on this judge have been ignored, while she has alsoignored the best interest of the child, while acting anti-mom , anti-women. She also ignores solid evidence, of DV, perpetrated against women and DV perpetrated against the protective mom.

Comment #: CA31172
Rating:Not Rated
Comments:
Judge Luna rules in favor of dads and men; she is is an anti-mom, anti-female, judge. Ignores strong evidence of DV and this is not in the best interest of any child, or mom-female, victim. She is biased, uninformed, rude and does not belong in family court.

Comments:
All the negative comments about this judge are true. Ignored well-evidenced DV with thorough testimony and witnesses. Also did something else completely out of line and against the best interest of the child(ren) to punish mother that I cannot speak about without it giving away who I am.
I will just say that it wasn’t anything related to allegations of abuse or alienation, or anything else common that you would guess that pro-dad/ anti-mom judges would even use to justify an order.

Comment #: CA30662
Rating:Not Rated
Comments:
This judge is motivated by power and politics. She should be nowhere near a courtroom, when they re-open. If you are connected, you will have no problem.

Comments:
Update to Comment #29179, apparently Luna is no longer in Mosk Department 88. I’d heard in February that she was supposed to be transferred again. LA County court website shows that she is now in Dept. 79, but upon contacting that courtroom it was confirmed that she is not presiding in that courtroom. Is this a case of “Where is Waldo,” but substituting Luna. There’s a parent who has been calling around LA County courts, the probate division (where she was alleged to have been transferred), the State Bar and the Commission of Judicial Performance, but no sign of Luna. I sure do hope that this is direct confirmation that her career as a serial abuser of DV survivors, women and children has been derailed. Even if she rears her incompetent, deficient head again the fact of the matter is that she’s taken a hit to her reputation despite Harriet Buhai hosting her on a panel in January (what a joke and a sure sign of how they can’t be trusted as an organization.)

Comments:
This judge is not qualified to litigate a paper airplane. She’s grossly incompetent, probably mentally and emotionally compromised herself and many in the DV community recognize this. She gets a collective groan whenever her name is mentioned in DV circles. Instead of complaining about this judge online, utilize the tools that are available by writing a competent complaint to the Commission on Judicial Performance. They have already transferred her to Mosk because of her gross incompetence and I heard in February that she is supposed to be transferred again. She is bad and LA County does not know what to do with her other than putting her in the last courtroom in Central. Her staff (bailiff, clerk and court reporter) all abandoned her long before she was removed from Long Beach. Use the resource that is available to you as a citizen and stopped wasting your time on this site. Make a competent complaint to the CJP, get help putting it together from an attorney at a legal aid clinic or DV agency. She is a public servant and should be removed from the bench for her abuses of authority and discretion. If grousing on here makes you feel better fine, but actually standing up to this poor excuse of a judge/woman by filing a formal complaint is empowering.

Signed,
Somebody Who Knows

Comment #: CA29133
Rating:Not Rated
Comments:
She was was rude and made comments about my physical appearance while i was extremely ill. While i was on the stand she told my attorney i looked like i had no thought process in my head.correct. next morning i was hospitalized receiving 2 pints of blood. Yet moments after her observation she allowed me to go out into the hall and sign deeds over to my ex. I understood nothing of what i signed. Both attorneys were aware my own as well before he auit representing me and laughed. He purposely left out medical records and letters from Drs. Forensic accounts made an absurd mistake causing a 2 yr delay while i was left sick and in fear being stalked on the streets. Judge Luna decided not to use their findings and decided on her own that i was able to find gainful employment after my exs attny said look at her. Nobody would hire her now. She used to be a pretty woman. He was awarded 100% of community property.i never saw judgement or signed it. Forensics report showed $18.000 avail for spousal support. I asked for $6,000
expecting maybe $4.000.
I got $2.500 and have to pay my own health insurance. I am still under doctors care and unable to work.
It is a divorce completely void.
How can these people hold their jobs?
If there were ever a judge that should be a complete void it would be judge Luna for perjury as she took her vows under oath. She wasn’t a family law judge yet back then I’m sorry to all it ever happened.

Comments:
This judge has taken away my grand daughter from my daughter for No valid reasons. Judge Luna had it out for my daughter and should never have been a judge in the California courts. The judge should be ashamed in doing this to any parent. My daughter is a Nurse for Kaiser and was the only parent this grand daughter ever had. the father is a bum . My daughters lawyer was a hack and did nothing good. The judge should be reprimanded for her unfairness. I do believe that one of her court reporters, the fathers mother got to the judge and made this injustice happen. the judge needs to be removed. all of her other judgements were against the mothers rights and she is a disgrace to the court system

2020 03 03
Judge Ana Maria Luna is moving to a Probate assignment. Cases currently assigned to Judge Luna in Department 88 will be randomly reassigned to other judicial officers. Matters scheduled on or after April 1 will be rescheduled and the parties will receive notice of the new departments, hearing dates and times

Jul 2, 2020 – Judge Ana Maria Luna was reassigned from Department 88 to Department. 79. Her assignment changed from Family Law to Probate

JOIN OTHER VICTIMS OF THIS DISHONORABLE JUDGE ON FACEBOOK