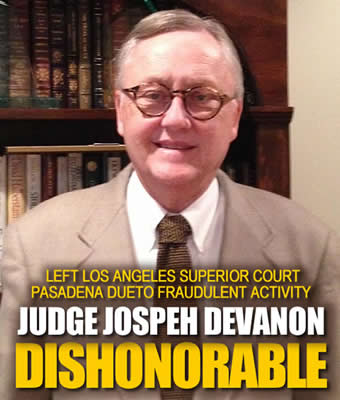 This dishonorable judge was removed from the Pasadena court house (lost his bar license) but as usual the bar keeps his records hidden from the public. But he still is working as a judge in the private legal sector
Judge Joseph DeVanon

“It’s not the kind of thing you ever expect, so when it happens you’re deeply appreciative for the governor’s vote of confidence and the support of all the people along the way,” said DeVanon, 40.

Effective June 1, 2012, Department NE S, Pasadena Courthouse, 300 E. Walnut St. 91101 will be converted into a settlement court, presided over by Judge Joseph F. DeVanon, Jr. Department NE S’ inventory of cases will be reassigned to Department NE R, and to the North Central District’s Departments NC A, NC B (Burbank Courthouse, 300 E. Olive 91502), NC D, and NC E (Glendale Courthouse, 600 E. Broadway 91206). Existing dates on calendar will remain. Notice of judicial reassignment will be given by the Clerk.

DeVanon has lived in the San Gabriel Valley since 1953, when his family moved from Chicago. He and his wife, Madelyn, have three children: Joseph, 13, Laura, 10, and Nicole, 3.

Salary for municipal judges is $86,157 a year. Full Story

Judge DeVanon lies at hearing: “He never contacted the court” this is a lie proven by substitution of attorney on the file, but withheld because Judge DeVanon received a bribe!

Commissioner Drewry also is bribed as he grants TRO with lies provided by attorneys Paz, Berke and my own dirty attorney Jack Kenneth Conway. I basically paid Conway to plead me guilty! Had I known that, I would have saved $10,000 by doing it myself!

Judge Rita Miller then sanctions me almost a million dollars on a free speech case!

Lastly, Judge Hickok is also bribed to order that I be a Vexatious Litigant with 2 fake cases! This is the equivalent of a police officer planting drugs or a gun on a citizen to secure a conviction!

Justice is for sale in our courts!

ATTENTION:
I am also offering assistance for anyone to represent themselves in court.
Blume-Casta Paralegal Assistance

Accepting all donations to fight corruption in our courts

For these reasons, plaintiff was ordered to show cause why he should not be declared a vexatious litigant under Local Rule 83-8. (Dkt 37). In that order, he was reminded why this case — like the four before it — cannot proceed in federal court because, among other reasons, it amounts to an impermissible appeal from state court orders over which federal courts have no jurisdiction. (Id. at 2). Plaintiff was given the chance to dismiss this lawsuit voluntarily to avoid vexatious litigant designation. (Id.). Yet while he responded to the order to show cause — with a response titled in part “Petition to Order all parties to respond in theft of Estate Property” — plaintiff provided no basis to excuse his vexatious litigation history in this Court. (See, generally, Dkt 40). As a result, this action must be dismissed, and plaintiff must be given vexatious-litigation restrictions in accordance with Local Rule 83-8.