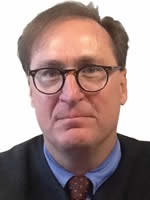 Randolph M. Hammock is a Superior Court Judge, currently sitting in an Independent Calendar (“IC”) Court at the Stanley Mosk Courthouse, Los Angeles, in which he presides over unlimited civil cases. He graduated from San Diego State University (1980) and the University of San Diego, School of Law (1983). During his almost 25 years of practicing law (primarily as a civil trial attorney), Judge Hammock was admitted to and actively practiced law in a total of 15 states, as well as over 20 federal district courts and courts of appeal. As such, he is likely to have had passed more bar exams than any other practicing lawyer in the United States. He was in private practice in Los Angeles from the mid-1980s to his appointment as a Superior Court Referee in the juvenile dependency court in 2008, where he served until elected as a Judge of the Los Angeles Superior Court in 2010. He has been a member of the American Board of Trial Advocates (ABOTA) since 2000.

Nov 18th, 2017
Someone from Los Angeles, CA writes:
I am a recent Victim of Deed Fraud, Fiduciary Duty, Negligence, Wrongful Foreclosure, by a group of 5 Real Estate Brokers and Fidelity National Title company Ticor Title & Chicago Title who refuse to pay the CLAIM on the Deed fraud that was done to my inherited PAID OFF Free & Clear property that my father transferred to me upon his death. These phony RE Broker & Realtor wife Investors created a loan on my property through a Ponzi scheme ran by New Haven Financial in Calabasas, CA (see Ripoff Report). I was never given any loan documents or escrow papers. The loans were found ILLEGAL with the Dept of RE, H-35387, but the Judge Randolph Hammock Dept 47, gave MY HOUSE to the crook Investors anyways !! I have contacted the FBI many times over the phone, gone into the FBI 4 times since 2009-10 when I discovered the Fraud, made reports with the only paper I had, a FORGED Quit Claim in my husbands name, made reports on the FBI online public corruption website, made an LAPD report, and the CORRUPT Judge Randolph Hammock of LA Superior Court DEPT 47 knows all of this loan was a Ponzi scheme ran by Lawrence S. Rabinoff and his company New Haven Financial who cleverly files Bankruptcy to get DISMISSED OFF the Case !!! The Dismissal was made a recent Ruling by Judge Hammock, and NOW the Judge has given my house worth $1.5-2 million to the investors who NEVER produced anything but a $375.00 check !!! Every document was a forgery or altered Deed document and recorded at the County Recorder’s office. I am in shock as he gave MY house to the investor’s wife on her fricken Birthday !! I have e children and a husband who is disabled living in our inherited home, have suffered 9 1/2 years since the Fraud began !! This has been a living nightmare and this Judge is a VERY BAD Judge who was on another case with us and is now BIASED against us !! As a US Born Citizen whose father was in WWII, I cannot believe how badly I feel about the corruption in this LA Superior Court, I have NO REASON to live in this country anymore !

Please rate this judge to protect the public