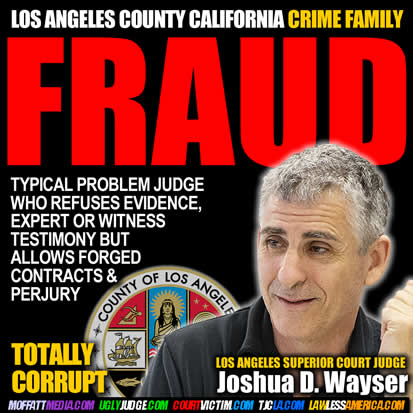 Joshua D. Wayser is a Los Angeles County Superior Court Judge in California. He succeeded Cesar C. Sarmiento who retired. Wayser was appointed by Governor Jerry Brown November 17, 2015.
He is a Democrat. Joshua Wayser received a B.A. from Columbia University, New York. Earned a J.D. from Columbia University School of Law. After law school Wayser clerked for the Hon. Louis L. Stanton with the United States District Court of the Southern District of New York in 1988. 1990 Wayser joined Los Angeles law firm Shearman & Sterling as an associate until joining Santa Monica law firm of Stern, Neubauer, Greenwald & Pauly in 1992. He left the firm after 13 years to work at Lord, Bissell, and Brook, LLC in 2005. 2008 Wayser joined Katten, Muchin, and Rosenman. He was appointmented to Los Angeles California Superior Court in 2015. His expertise was in banking and real estate litigation. His memberships include the Gay and Lesbian Legal Services Clinic and the Union of Reform Judaism.

Yanny and DiNardo flush transcripts down the memory hole

They are trying to anyway. I’m bang over the target in needing these trial transcripts. We definitely need court watchers in Santa Monica Dept. E on March 21, 2022. I’m doing a closing argument, and it should be one for the ages – guaranteed.

After 7 years of illegal conduct by the home court judges, there has now been so much illegal judicial conduct by the Trial Judge Joshua Wayser, its hard to know where to begin. He refused to let my handwriting expert testify about the forged music contracts. He refused to allow my lay witness to testify about the lockout. He refused to take judicial notice of the fact that the entire federal trial – with all its bogus findings of fact – was overturned and vacated. He allowed attorney Joe Yanny to lie about it, refused to sanction him. After all, if you refuse to look at the judicially noticeable evidence, these crooks can get away with anything.

Read this email – it explains.

Judge Cruella is in the house

Once in a great while, a superior court judge gets appointed to the bench and exhibits behavior that makes those sitting in front of him or her wonder “what did he/she just say?” This is becoming rather common in the California courtroom of Judge Joshua D. Wayser, to the point of giving legal advice from the bench to one counsel or the other. Calling litigant names, “I am afraid your client is Count Olaf.” (Now you must keep in mind that the “Honorable One” has been fed a great big story and has apparently bought it lock, stock, and barrel by opposing counsel!) Note: The other litigant, dad, is actually a bad actor and has been arrested for a felony and a DUI and has serious credibility issues. Thank god he is not blond and blue-eyed; God only knows what the court might do to make things better. FULL STORY

Judge Lacked Authority to Bring His Own Allegations Against Father

A Los Angeles Superior Court judge improperly assumed an advocacy role when he amended a dependency petition on his own motion to allege abuse by a father who had not been named as an offending parent by the Department of Children and Family Services, the Court of Appeal for this district has held.

Justice Luis A. Lavin of Div. Three penned the opinion, filed on Thursday and made public Friday. It reverses the jurisdictional finding by Judge Joshua D. Wayser.

The DCFS brought the dependency petition alleging that the mother of a girl, identified as “G.B.,” had failed to protect her from sexual abuse perpetrated by the mother’s boyfriend.

Trial Court Proceedings
Wayser found the department’s allegations untrue. He noted that the girl had recanted her statements that the mother’s boyfriend had abused her to her therapist, and appeared “practically giddy” in a video recording of the interview with the therapist.

He also cited the history of unsubstantiated allegations against the mother; the department had previously investigated but rejected three such claims before the present case.

Despite his finding, Wayser did not dismiss the petition, which had only alleged the abuse and the mother’s failure to protect the girl.

Wayser’s Allegations
The judge indicated his intent to sustain the following allegations:

Counsel and parties are instructed to identify the assigned judicial officer and department on the first page of all documents filed with the clerk, beneath the case