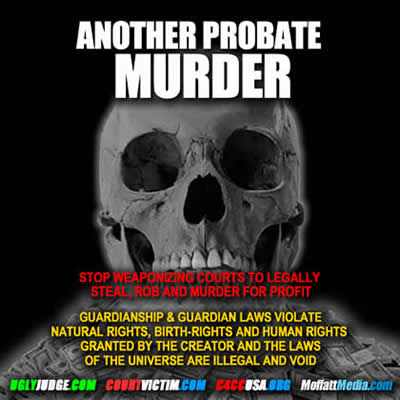 Lawrence Yetzer was standing in his front yard, yelling. The fifty-two year old Rialto man, who was blind and suffered from cerebral palsy, had just discovered his father lying unmoving on the front room floor.

“Help!” yelled Yetzer. “Something has happened to Dad!” Please help us!”

Neighbor Yvonne Boone remembers that the paramedics came. Yetzer’s step-father, Max Vantilburg, had died of a heart attack. And Lawrence Yetzer, who had lived with his parents his entire life, was left alone in the world. He was also left a chunk of money, as the sole beneficiary of the Anne and Max Vantilburg estate.

The court appointed Melodie Scott, of C.A.R.E., Inc, as the Successor Trustee of the Vantilburg estate. In a separate proceeding in San Bernardino Court, Melodie Scott moved to have herself appointed as Lawrence Yetzer’s conservator.

Yvonne Boone, who knew the family for years, disputes this statement. “He wasn’t retarded like that,” said Boone, who had also served as a caregiver for Yetzer. “He was a real sociable, talkative guy. Sure, he was blind, but he understood what was going on around him.”

The conservatorship lasted less than four months. On February 6, 2001, Lawrence Yetzer died. On January 14, Boone, who was caring for Yetzer on a full time basis at that point in time, noticed that he was sick. “He was coughing and his color was bad,” she recalls. He was taken to San Bernardino Community Hospital and admitted. The Sentinel has obtained these records, which state that he was “cyanotic” (blue) at the time of admission. He was admitted with a tentative diagnosis of congestive heart failure and pneumonia.

But his bronchoscopy showed no trace of a pneumonia bug and his white blood cell count, which would have been elevated if he had any type of infection, was normal. Questions began to surface, evidenced by doctors’ notes, as to what was really wrong with Lawrence Yetzer. The diagnosis shifted to “severe adult respiratory distress.”

Within a few days of admission to San Bernardino County Hospital, his white blood cell count began to climb, revealing that he had caught some kind of infection while in the hospital. He was put on a ventilator on January 16. The nursing notes state that Yetzer was put on “Versed 2mg IVP given for sedation as per MD order every five minutes due to patient fighting the ventilator.” He was put in restraints and shortly the doctor ordered him to be given regular intravenous Atracrium, which paralyzed him. The restraints were then removed. The doses of Atracrium continued.

And then his course of treatment took a curious turn. This reporter has retrieved his medical records from this hospitalization, which were requested from the hospital by an aunt, living in Ohio. San Bernardino Community Hospital had initially refused to release these records to the aunt, who, as next of kin, is legally entitled to these records. After the hospital was supplied with detailed proof that the aunt was indeed next of kin, the hospital then lost the request. The request was again submitted, at which point the hospital stated that they would not give the records to the aunt, but only to who was listed as “next of kin” on Lawrence Yetzer’s death certificate.

However, the standard death certificate has no box for “next of kin.” A query was made as to what law the hospital was citing. When it was also suggested that a judge might make a different determination, the hospital backed down and agreed to send the records.

Only partial records were sent to the aunt and another request was then tendered. Renee Wheeler, the administrator in charge of medical records at San Bernardino Community Hospital, inquired if there was going to be legal action taken.

The medical records show that Lawrence Yetzer was dosed with a number of sedatives and opiates which severely retard a person’s ability to breathe. He was put on a Versed drip often as high as 10 mg an hour, as well as Ativan ,Phenobarbitol and Atracrium . The doctors’ notes repeatedly refer to Yetzer as “paralyzed and sedated.” Finally, on February 3, three days before he died, he was curiously started on Morphine injections. The hospital records list the dose as 4 mg every 3 hours PRN. There were no indications in the records that Lawrence Yetzer was in pain and would have needed Morphine.

Morphine and Versed are both contraindicated for people in respiratory distress and may put an individual into respiratory arrest. The two in combination are known to have a potentiating effect. Drug companies have issued cautions about mixing Versed with Morphine or with Phenobarbitol, as these combinations may result in respiratory failure. He was also given antibiotics. On the day of his death, a nurse cryptically noted that “PT on multiple antibiotics-In spite of no organisms identified.”

On February 6, a conference was called with Scott, Alan Garcia, Dr. Arora and hospital administrators. The decision was made to issue a DNR (“Do Not Resuscitate” order) and to pull Lawrence Yetzer off his ventilator. The records state that “a terminal wean was done” after the chaplain visited Yetzer. Dr. Arora signed the order to withdraw him from life support and Lawrence Yetzer died.

In her final accounting for the Yetzer conservatorship, Melodie Scott declared to the court that Lawrence Yetzer died of a “sudden massive stroke.” His death certificate lists pneumonia as cause of death.

Inexplicably, the hospital records state that as of January 23, a “new conservator,” Alan Garcia, was assigned to Lawrence Yetzer. Garcia worked as a case manager for Scott’s company, C.A.R.E., Inc. Conservators are appointed (and changed) via court proceedings. There is no mention in the Yetzer court file that the conservatorship changed hands from Scott to Garcia.

But the story takes an equally disturbing turn here. Scott’s accounting for the Vantilburg Trust details $396,529.89 as the remainder in the Trust and duly lists the distributions to the remainder beneficiaries. The Trust was to be split so that 50% was distributed in equal shares to the seven surviving brothers and sisters of Anne and Max Vantilburg (Yetzer’s deceased parents) and 50% distributed in equal shares to four charities . The First and Final Accounting bears the signature of attorney J. David Horspool, who duly noted in this document that the siblings would each thus receive 7.14285% of the final assets and the charities would each receive 12.5%.

The Final Accounting notes that a total of $300 was distributed to Lawrence Yetzer .

E. Joan Nelms, who is a probate attorney working in San Bernardino, presided over the case as a judge pro-tem. Nelms has represented Melodie Scott in a number of cases.

This reporter contacted attorney J. David Horspool requesting input about the unaccounted -for monies and issues surrounding Lawrence Yetzer’s hospital care. Initially, Horspool agreed to get his files out of storage in order to answer the questions. When he failed to respond, this reporter again contacted attorney Horspool, who then levied threats of legal action. On June 11 he wrote, “ I am not going to call you. Furthermore, the issue isn’t with the Lawrence Yetzer matter. The copies of the Receipts which you faxed to my office concerned the Van Tilberg Trust. I have in my files original signed receipts for the funds that were distributed, which reconcile to the assets on hand at the end of the accounting period, adjusted for payment of court-approved attorneys’ fees and trustee’s fees. So there was no failure to distribute $300,000.00, or any other sum. For you to imply, allege or in any way accuse either myself or Ms. Scott of not distributing all of the funds as she was required to do would be wrong, and, now that you know it would be wrong, would also be viewed as grossly negligent at best, and maliciously done in utter disregard of the truth, at worst. Either way, it would be actionable and I am putting you on notice that such action would be taken should you make such unfounded accusations.”

In an unusual manner of ending the communication, he then wrote: “Have a nice rest of your life for however much more time the Good Lord grants you.”

This reporter responded urging him to turn over the receipts which he alleged would reconcile the accounts. At that point, it appears he blocked further emails.

An appeal was made to J. David Horspool’s sister, Karin Horspool, who works as an attorney in the firm of Horspool and Parker. She responded by threatening to issue a restraining order.

In June of 2009, the San Bernardino County Sentinel reported on the case of Elizabeth Fairbanks, also a former conservatee of Melodie Scott, who died after contracting pneumonia. Scott had used her power of medical care to withhold antibiotics from Fairbanks. Fairbanks was also given Roxanol, which is a liquid form of morphine, prior to succumbing.

Melodie Scott, whose professional fiduciary license was denied by the California State Professional Fiduciary Bureau after Administrative Law hearings which spanned from May to October of 2009, has appealed the denial of her license. Her license was refused on the grounds that she 1) made false statements on her licensing application 2) continued to act as a fiduciary after her license was denied and 3) had a drunk driving conviction. Gary Duke, who is a lawyer with the Department of Consumer Affairs, has stated that a final decision should be reached in mid-July. In the meantime, Scott has begun a new business, Reliant Professional Services, located at 104 State Street in Redlands, which is also a conservatorship business. Duke stated that the Department of Consumer Affairs only licenses individuals and thus Scott may own a conservatorship company if she does not herself perform fiduciary or conservator functions.