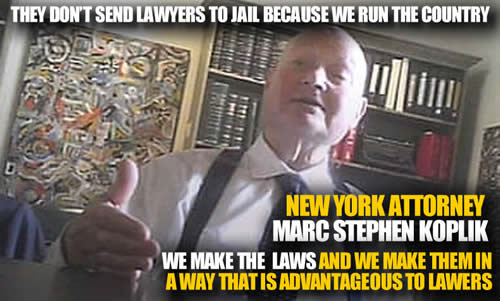 Marc Koplik, former Biglaw associate and partner at Henderson & Koplik, caught on tape advising an investigator for the anti-corruption non-profit Global Witness posing as a potential client asking how they might mask suspicious funds in the U.S., and making these bold statements about potential liability. His informal advice was shown on an episode of 60 Minutes in 2016, and has led to a public censure, by the New York Supreme Court Appellate Division.

Marc Stephen Koplik is one of 13 lawyers involved in a sting. The fact that only one lawyer out of 13 did the right thing in the sting points at the fact that a big percentage of lawyers are in fact dishonest, immoral and criminal. However what this dishonest lawyer stated in the video is the very reason American courts are so dishonorable today.

This new investigation lifts the lid on how suspect funds can enter the U.S.

Wearing a hidden camera, a Global Witness investigator met with 13 New York law firms. Posing as an adviser to a foreign government minister, the investigator asked the lawyers how to anonymously move large sums of money that should have raised suspicions of corruption. In all but one case, the lawyers provided suggestions on how the minister might get the money into the U.S. without detection.

The meetings were all preliminary; none of the law firms took the investigator on as a client.

The key findings from the investigation are:

Anonymously-owned companies are often used by criminals to cover up illegal behavior and launder money. They can be used to do business just like any other company, with one critical difference – it’s almost impossible to tell who the real human being behind them is. Instead, the company can be owned by a “nominee” – someone who rents out their identity – or even by another company, which itself can be anonymously-owned. This hurts ordinary people and society as a whole. It has a particularly devastating impact on developing countries which lose billions of dollars that may otherwise be spent providing services, such as education and infrastructure.

Global Witness has sought the view of two leading U.S. legal ethics professors, William Simon of Columbia Law School and John Leubsdorf of Rutgers School of Law on the legal ethics rules governing lawyers. The ethics professors concluded that Mr. Silkenat and his partner, Mr. Finnegan, did not violate the governing legal ethics rules and provided the following opinion on the conduct of Marc Koplik, John Jankoff and Gerald Ross in the preliminary meetings. Their opinion reinforces that the legal ethics rules should be revised to explicitly bar lawyers from assisting prospective clients in illegal or fraudulent conduct. Click here for the full report from Professors Simon and Leubsdorf.

They don’t send the lawyers to jail because we run the country. Another way to look at it is the old adage: A good lawyer knows the law, and a great lawyer knows the judge. Now in point of fact, I went to law school with half the judges that sit on the New York State Supreme and federal district court in New York. Are they going to throw a case for you? No. But are they going to bend over backwards to be courteous to you? Yes they are.

The Attorney Grievance Committee commenced this disciplinary proceeding by a petition of charges (Judiciary Law § 90[2], Rules for Attorney Disciplinary Matters [22 NYCRR] § 1240.8), alleging that respondent was guilty of certain misconduct in violation of the Rules of Professional Conduct (22 NYCRR 1200.0) because he counseled a client to engage in conduct he knew was illegal or fraudulent and suggested to the client that lawyers in the United States can act with impunity. Specifically, respondent met with a potential client who represented himself as appearing on behalf of a West African minister. The individual stated that the minister desired to purchase real property in the form of a brownstone, an airplane, and a yacht in the United States. Respondent was under the impression that the money involved was in the tens of millions. The individual’s explanation of the source of the money suggested that the money was questionable. The individual related that “companies are eager to get hold of rare earth or other minerals … And so they pay some special money for it. I wouldn’t name it bribe; I would say facilitation money.” Respondent informed the individual that they would need to hide the true source of the money by setting up different corporations to own the properties the minister sought to purchase. Respondent also provided assurances regarding protection of the attorney-client privilege and stated that “[t]hey don’t send the lawyers [in the United States] to jail because we run the country.”

The parties agree on the stipulated facts, including the admission to the acts of professional misconduct and the violation of rules 1.2(d) and 8.4(h) of the Rules of professional Conduct, the relevant factors in mitigation, and on the discipline. The parties now jointly move pursuant to 22 NYCRR 1240.8(a)(5) for discipline by consent and request the imposition of a public censure.

In support of the joint motion for discipline by consent, the parties rely on Matter of Jankoff (165 AD3d 58 [1st Dept 2018]), and agree that the circumstances in that case are analogous here and should be followed. In light of the significant factors in mitigation, including respondent’s cooperation, admitted conduct and acceptance of responsibility, and the fact that the misconduct was aberrational and occurred in the context of a single, open-ended conversation during a meeting with a potential client after which respondent took no further steps, the parties agree that a public censure is appropriate.

Accordingly, the parties’ motion for discipline by consent should be granted, and respondent is censured. The Committee’s separately filed petition of charges should be denied as moot.

All concur.
Order filed. [January 15, 2019]
The parties’ motion for discipline by consent is granted, and respondent is publicly censured (M-5384). The Committee’s petition of charges is denied as moot (M-4179).

Mindful Lawyering: The Ethics of Knowing When to Say No (4-4-16)