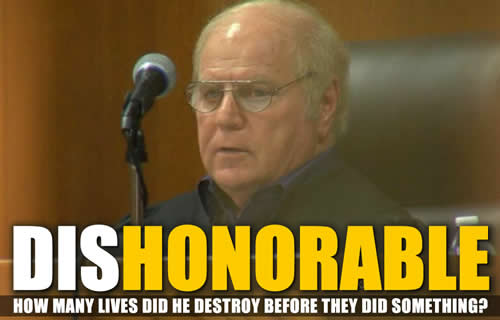 Now dozens of the defendants have accused Judge Joseph Boeckmann of sexual abuse and misconduct, saying the small-town judge paid them to allow him to spank their naked buttocks with a paddle and to take photos of the red skin. Others said they posed nude in exchange for money to pay off court fines.

How many other judges commit crimes and abuse and nothing is done?

Judge Joseph Boeckmann “systematically used his authority and the trust of the state of Arkansas … to prey upon people he knew would be less credible, people who were in danger of losing their houses, their jobs and their freedom. He is a predator,” said David Sachar, the commission’s executive director.

The 70-year-old Cross County judge Joseph, who has denied the allegations through his attorney, resigned in May, ending the commission’s investigation. But at least part of the probe has been turned over to criminal investigators. No charges have been filed.

Who do you think is paying the legal costs for this scum to get away with this?

“His resignation is not to be construed as an admission of anything,” said Judge Joseph Boeckmann’s attorney, Jeff Rosenzweig. He said his client concluded that it was “not worth going through the hearing to keep a position that he would have vacated at the end of this year anyway.” The judge did not seek re-election in March.

The judge, Joseph Boeckmann, Jr., resigned Monday in the face of mounting evidence discovered by the Arkansas Judicial Discipline and Disability Commission, which was tasked with determining if the man should be sanctioned or removed from the bench after an initial complaint filed last November. While Judge Joseph Boeckmann had previously denied the allegations, his attorney, Jeff Rosenzweig, refused to comment further on the judge’s resignation, reported the AP. Judge Joseph Boeckmann’s letter of resignation did not include either a denial or confirmation of the charges.

Ongoing local coverage of the incident and publicity on social media motivated victims and witnesses to step forward, according to investigation documents, and share uncomfortable experiences they had with the judge Joseph, who presided over Cross County. Sachar told the Arkansas Democrat-Gazette that at least 12 alleged victims have been named in the commission’s complaint so far, and estimated there were “several dozen more, if not 100 or more.”