Washington County Sheriff Ed Graybeal and a handful of corrections officers at the Washington County Detention Center are adamantly denying allegations that Stewart Peppers was beaten to death inside the jail in April.

The parents of Stewart Peppers, who died on April 29 while incarcerated at the jail, filed a $20 million lawsuit in federal court against the sheriff and his jailers in July. The suit claims Stewart Peppers died because of injuries he sustained in an alleged 20-minute beating by corrections officers at the jail.

Stewart Peppers had been in the jail for three days.

All parties agree that Stewart Peppers was being housed alone, in a single cell on April 29 when he became incensed and began shouting obscenities at jail personnel on duty that day.

Stewart Peppers’ parents say their son endured an initial beating when officers entered his cell, then strapped him to a restraint chair and again beat him even though he was unable to move.

They also claim chemical sprays and a Taser were used on the 22-year-old.

In an answer to the complaint, which was filed in U.S. District Court on Aug. 9, the defendants admit to using both a Taser and chemical spray on Stewart Peppers, but deny any beating took place.

Did inmate die from anabolic steroids and pot or beating/tasering by prison guards? 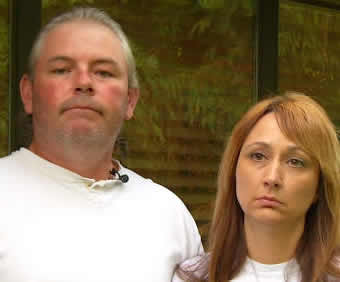 Joe and Natasha Peppers the parents of Stewart Peppers

What really happened in jail incident that left inmate dead?

No charges in death of Washington County inmate