How Criminals Hide Behind Images to Escape Investigation and Prosecution 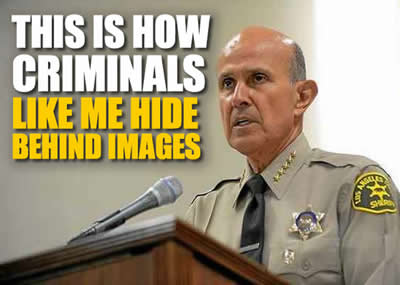 How Criminals Hide Behind Images to Escape Investigation and Prosecution
Absolute power often corrupts because the lack of fear and prosecution which everyone else is forced to abide by. The point is the public is forced to obey or be punished thus they obey. Police, Judges and others in government authority positions feel “Above the law” and often hide behind images. Because of their position they don’t expect to be questioned, accused or investigated. The fact Los Angeles sheriff Lee Baca was guilty should expose the fact there are numerous others in the form of judges, police and government officials who are also criminals who never get investigated.

One example is Santa Clara County California Judge Socrates Peter Manoukian who has abused and terrorized dozens of known victims without prosecution or investigation. People don’t want to accept that a judge could really be nothing more than a criminal who made his way to the bench. Sociopaths often get into such positions by lying, fraud and other dishonest acts but since they’ve never been caught there are no records. Once in these positions of power they go on abusing the public with impunity and are protected by a system not based on justice. No one wants to take on a judge, police officer or government official little less consider the fact they’ve put a monster in power. Yet it’s done all the time.

Sheriff Lee Baca continued to stay employed and abused his powers by getting others to terrorize, lie, commit fraud and stop anyone who tried to expose him. Same goes for Judge Socrates Peter Manoukian. Where are the standards? The law and constitution? They mean nothing when an authority figure with an image is the being accused. The courts which are run by these same people refuse to prosecute each other or those who support them, ie police officers.

This is how the system protects those within and throws the book at everyone else.
Sheriff Lee Baca has millions at his disposal to hire “connected lawyers” while everyone else is forced to obey the law.

The Real Issue is “unprofessional bullies hiding behind badges”
Hiding Behind the Badge
“You’re a coward, hiding behind your badge” — Judge rules in favor of man arrested for telling cop the truth
Police hide behind badges to commit crimes

This criminal did what most criminals who hide behind images do, they retire instead of being prosecuted and put in prison for life>
Judges who are exposed never get prosecuted like the churches who hide molesters of children then simply move them around.

The public is being fooled with a bogus prison term which should have been longer and harsher, why because he is above the law