Home » State » Arizona » The worst criminals hide behind an image

The worst criminals hide behind an image 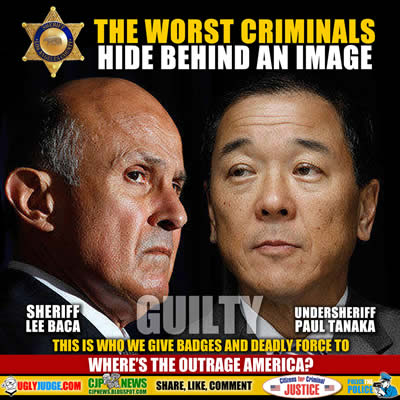 The worst criminals hide behind an image, a badge, black robe, fancy name or position like a doctor or lawyer. All over America people are victimized by criminals who may not have a record, yet they get into positions of power and control. Once hidden behind that image of trust they’re free to abuse, commit crime and even murder with immunity. Judges are high on that list and hundreds of thousand of victims each year cry out about their crimes. Yet no one listens because they don’t want to question an image.

Police are trusted because of that image that their here to protect. But what happens when a bad person gets into a position of power? The fact is you can’t trust anyone below them in the chain of command. America is taught to trust an image but what is an image if the person behind it is in fact a criminal, dishonest and lack integrity?

One of America’s biggest cities is infected with corruption from police to the courts, from prosecutors to district attorneys. Why because when victims go to them with crimes by those with an image, they’re often ignored, terrorized or forgotten. All because that image is so powerful it’s often immune to investigation or prosecution. Lets not forget Paul Tanaka was a mayor as well.

Los Angeles County Sheriff’s Department Undersheriff Paul Tanaka was convicted in connection with a sweeping, federal civil rights investigation of corruption and deputy-on-inmate abuse inside the jail system, which is run by the LASD.

Tanaka was found guilty by a federal jury of obstruction of justice and conspiracy to obstruct justice.

The 57-year-old was accused of leading a conspiracy to hide jail inmate Anthony Brown after the LASD learned that Brown was an FBI informant, feeding information to the feds about alleged corruption and excessive force against inmates inside Men’s Central Jail.

Tanaka, who is the current mayor of Gardena, faces up to 15 years in federal prison when he is sentenced on June 20 by United States District Judge Percy Anderson.

Decker said the corruption was an issue of leadership and the jury clearly stated it should not be tolerated in law enforcement.

“They have sent a very clear message that corruption within law enforcement will simply not be tolerated, particularly when it comes from the very top of those organizations,” FULL STORY