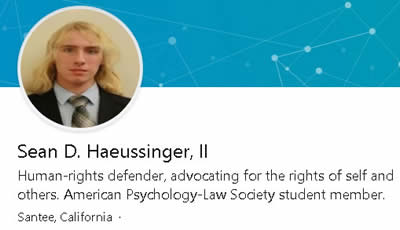 ABUSE BY A SAN DIEGO JUDGE AND LAWYER

Goldstein
Some other offenses by Goldstein include denying and disparaging my right to _assistance_ of counsel (cf. U.S. Const., amend. IX) by continuing to legitimize the Faretta court’s contradictory determinations on the Sixth Amendment (18 USC §242), which would have protected my right to standby counsel as a reasonable accommodation for an anxiety disorder caused by the County’s conduct. I have prior information on a mental–health victim named Lee Quillar, who was victimized by Dishon. Hebert J. Exharhos, who almost presided over my second trial in spite of a challenge against him. Despite some concerns about prosecutorial misconduct, Goldstein ultimately failed to alert former DA Bonnie M. Dumanis to DDA Vanessa C. Gerard’s mishandling of her case. Goldstein even withheld evidence from the jury (cf. Cal. Gov. Code §§ 11120, 54950 [no right to decide what is/is not good for the People to know]), just as Gerard’s inappropriate attack on the jury’s authority violated my right to a fair trial after my first trial resulted in a hung jury. It also obstructed justice, given Goldstein’s protection of the County from accountability for the perjury they also committed.

Despite this, my sentence may have been consistent with what the dissenting juror wanted. Goldstein also tortured me by going to therapy too often, without regard for my wellbeing, and threatened to send me to jail for reasons that could have been out of my control. He also put my disability on public record in violation of HIPAA and CIMA (see also Cal. Pen. Code §§ 422.6–422.7). My mental health is not the only thing that suffered, and I was put on a 5150 by one of the terrorists who compromised my mental health, in the first place.

In addition to other remedies TBD, the suspect owes me $2,400 for labor he ordered stolen from me from abusing the process for the Thirteenth Amendment (and I am an abolitionist), and for the fine he obstructed me from paying by denying a stay of execution for the duration of my appeal on a motion denied on the basis of protected speech.