If you’re new to CON-Conservatorship or Guardianship below are the basic steps as
to how the system is twisted against YOU (the honest, good person). Unethical
judges and lawyers are only interested in billing for huge legal fees. The evidence
is when the victim has no more funds they dump them in the streets or hand them over to welfare. This is ONLY done to people who have money. They use the guise “We’re guarding or conserving a person to protect them”. While conservatorship and guardianship was originally established to protect people, unethical lawyers and judge quickly took advantage of the concept using them to legally steal, rob and murder people for their estates. Being cowards the judges and lawyers almost never see the victims, why would they, they’re not interested in the persons welfare only their estate, savings or bank accounts. Victims are quickly drugged, isolated after which their constitutional rights and protections are removed or evoked by the judge. Any and all control over your own life is given to a stranger or someone you’d never want to have control. Once drugged with heavy psychotropic drugs victims will appear to have dementia or other mental issues. This allows the court or unethical persons involved to convince others that their actions are needed. The victim on the other hand is now neutralized and helpless to contact police, call for help or stand witness against the criminals who now are legally stealing. Many victims ultimately are murdered by the medications which helps cover up the entire crime by removing any witnesses or evidence. 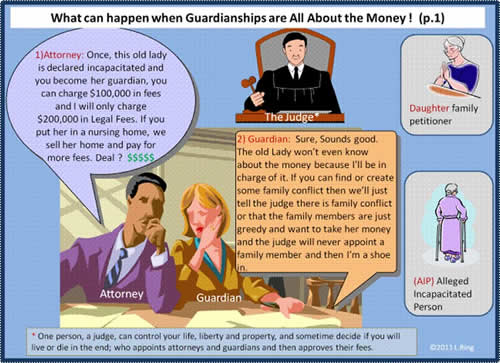 Just because a judge demands they be treated “HONORABLY” does not mean they are ethical, moral or honest. Remember a judge is nothing more than a lawyer who more often today was a BAD lawyer rather than good one. Getting a seat on the bench today means being IMMUNE from prosecution of crimes. This means judges CAN and DO steal, lie, murder and cause harm to people and can’t be prosecuted. 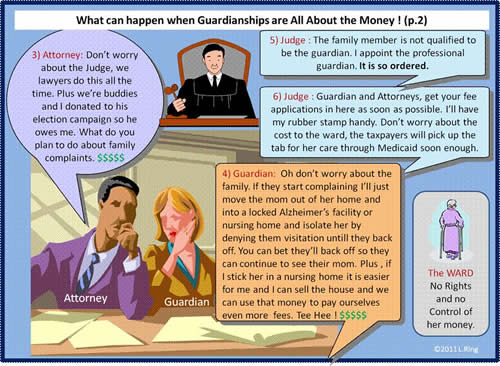 American courts have become big business for lawyers. Lawyers are all about the creation of legal fees. This can be delays or unnecessary hearings which all run up the clock and as you know they bill $200 – $600 an hour. So just starting a legal proceeding can cost a normal person their entire life savings. Unethical lawyers and judges included all see this as income. Matters not if a family is destroyed, lives end or even if seniors, veterans or children are abused, drugged and isolated. Remember judges are nothing more than lawyers and far too often bad lawyers make even worse judges. Our nation is being destroyed by unethical people who call themselves lawyers. There is no justice for all, nor a fair legal system.

COMMON DIRTY TRICKS
1. Mailing court documents and notice of hearings to the wrong address.
2. Allowing Perjury
3. Rubber stamping everything one side does
4. Ignoring everything one side does
5. Denying constitutional and civil rights
6. Ignoring crime
7. No due process
8. Stopping you from representing yourself
9. Sealing documents so crimes are hidden
10, Changing or removing the court reporters record
11. Failure to consider evidence or read petitions