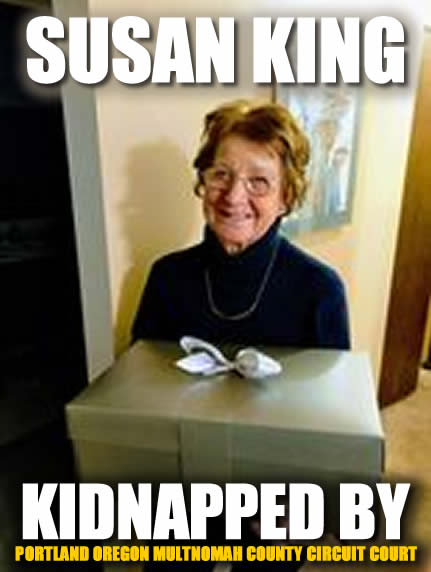 STARTED IN 2016 and got out of hand by 2019
Susan King had been living on her own for years with no problem. She found her Trust Co selling her assets for half price and mishandling her finances in various other ways. She hired an attorney to get rid of the Trustee. The Trustee’s attorney fought back and threatened to put this woman, their client, into Guardianship and take complete control by coercion. A lawyer/court visitor submitted a report to the court filled with lies (easily proven) and the rest is history. Instead of living in her beautiful historic home, overlooking the Columbia River, she’s being held in a memory care unit. Isolated from family and friends. Classic story of corruption!

It was a little over 3 weeks ago that I sent you a recording of Susan King, and me, talking on the phone about her situation.

I’m sure I mentioned that conversation had occurred AFTER Susan King was declared “Totally Incapacitated”. I believe that you have listened to the recording. I didn’t ask you for anything, other than to listen to it. If you have, what did you think? Did Susan sound totally incapacitated and incapable of effectively communicating?

I believe I might already know the answer, as plenty of other people have also heard that recording and were astonished, and appalled, to hear Susan had been declared “totally incapacitated” beforehand.

This is all a bit harrowing for me. I know what I’m up against and I know, for a fact, Oregon’s “guardianship system” has been “misused” by Probate Court insiders. I have mountains of evidence, but so what? Who is willing to look at the truth and correct this situation? Can Susan’s situation even be corrected? I can prove everything I say, but who will investigate and (rightfully) punish their own peers for perjury or Elder abuse?

The “Twister’s of Truth” in Susan’s case always start their remarks with “The respondent suffered a traumatic brain injury in 2015”. It’s true she did have a subdural hematoma, but she’s recovered from that. Despite that, they keep using it as their “go to” opening line to “justify” their “need to protect” Susan King.

Below is a screenshot of an email Susan sent to her attorneys after a court ordered attorney was appointed for Susan, and back when Ann Yela first made her false accusations, in an “emergency” petition, in her attempt to gain complete control over Susan and her assets. Susan’s been trying to fight this ever since.

This is just one of many emails I have from Susan. Over the course of our long, and intimate (in a friendship way,) relationship we have exchanged several hundreds, if not thousands, of emails.

A court visitor/lawyer once made light of me in their report by saying; “Loyd Waugh thinks he knows more about Susan’s condition than a neurologist, because he talks with Susan every day.” Really?

So, a neurologist who met with Susan for a few hours, had their assistant perform the majority of tests, then billed Susan $5,000 knows more about her than her best friend, who was talking with her every day? I think not.

My family are hardworking farmers and blue collar tradespeople, who have always helped others and would never think of taking advantage of anyone. I was raised by my grandparents on their farm in Damascus, OR. My grandfather was my hero! He was the hardest working, most honest, man I’ve ever known. Sadly, I didn’t get to spend as much time with him as I’d like to have before he passed away.

As a union carpenter I would, occasionally, travel to where the work was happening. One of my favorite jobs was a seismic retrofit of The City and County Building in SLC, UT. Hard work, but very rewarding. My name is etched in the clock tower, for all eternity, along with many of my then co-workers. I mentioned that not to gain favor, necessarily, but because I know you are the son of good, honest, hardworking parents that know a friend of mine, Ronda Butler. She knows your father and speaks very highly of him.

I have been Susan’s closest friend for over 12 years. I know Susan was wrongly declared incapacitated. I know her, very well, as I know the circumstances that led to her current situation. I can name each and every individual that participated in this “charade,” along with their actions and motivations. Their lies about me furthered their cause by rendering me useless to help Susan against their, “agenda driven,” actions. That, by the way, has caused me untold anxiety nearly every day.

I am still more concerned with Susan’s situation. Susan had her freedom, but she doesn’t now, and she never will if nothing is done to correct this brazen travesty. This is all wrong and something should be done about it.

I’m nearly 65, so I’m not sure how long I want to battle this corruption. I’d rather be enjoying my life, instead of dealing with this garbage, but I love Susan and I dislike others having taken advantage of her. She has been telling others what she wants for a long time, but continues being optimistic and accepting that they’re trying to help her. They have not helped her. They have only helped themselves. She’s lost over a million dollars in assets since this began.

I have plenty of other recordings, pictures, emails, and even videos that would clearly demonstrate Susan’s cognizance, clarity of mind, and ability to live independently. I also have invoices and other pertinent documents indicating the losses Susan has suffered at the hands of her “helpers.”

Please, take a look at the attached email image and decide for yourself if you think an incapacitated person wrote it, or if they didn’t know what they wanted.

If my writing appears disjointed or out of context, I apologize. English was not my favorite class, and I’m writing this on my phone. Also, I copied Rick Black and Ronda Butler. I hope you don’t mind, as we stay in touch and keep each other informed.

Thank you for your time.

But, I’m afraid, it’s not nearly enough! Here’s why I say that…

My very best friend in the world, Susan, recently became yet another victim of Oregon’s unjust, unforgiving, and morally bankrupt Guardianship System. Dishonest, uncaring, lawyers and probate court insiders have literally stolen my friend’s life. They have stripped her of all her rights, her freedom, and have complete control of all her assets!

Susan and I have been the closest of friends for 12 years. We’ve been through thick and thin together. Susan and I are as close as friends can be. Before this happened we would send hours on the phone, nearly everyday, sometimes 4 or 5 times a day. We visited each other and went out for meals, regularly. My Mother is no longer with us, otherwise Susan would be my 2nd closest friend. I truly loved my Mother. She was very smart and very kind. More people should be like her!. I love Susan too and I’m horrified this has happened to her!

Greedy lawyers aware of Susan’s vulnerability, as an unassuming wealthy widow, have taken full advantage of Susan and, with the aid of a dubious court visitor who provided the court with a very damning and very false report, she’s now lost her freedom and all her rights. It would appear that a morally and/or ethically challenged probate court judge, working in harmony with the lawyers, has declared Susan “Totally Incapacitated” Totally fraudulent and/or corrupt might be more accurate. I don’t normally call people names or negatively label anyone unless I’m quite sure they are deserving of the title. Susan is light years away from being “Totally Incapacitated” especially according to Oregon State’s legal definition of “Incapacitated”.

Before this tragic event occurred Susan had been living quite well, all by herself, for the better part of the last 3 years. She’s now trapped in a Senior “Living” Center where she has full time, 24 hour a day, rotating, “caregivers”. Guards would be more accurate. Guarding against anyone who honestly cares about Susan from freeing her of the shackles which have been placed on her! The lawyers have done their job and secured her assets and are now free to do whatever they please with her money and property. In total, so far, this has cost Susan nearly $1,000,000!!! Susan had given me power of attorney to try and prevent all this from happening but the lawyers had it revoked. How convenient.

I record my calls during the regular course of business so it’s not unusual for me to have recorded conversations on my phone. I’ve attached a call that I’d very much appreciate you listening to. This call is between Susan and myself and it took place on March 16, 2020 – It’s approx. 26 min. long. Eight days after this call took place I was informed, rather rudely, by a complete stranger that I am not allowed to have ANY contact with Susan. Imagine how it feels having your best friend taken away and being told by a total stranger that you are not allowed to have any contact with them! Let me tell you how it feels, horrible! Like a part of you has died! I am sure Susan misses me and wonders why she hasn’t heard from me. This is terribly wrong!

I would very much appreciate your opinion as to whether or not you think Susan sounds as though she is so “incapacitated” that she is incapable of “effectively communicating”.

If you agree she doesn’t sound as though she cannot “effectively communicate”, which is exactly how Oregon law reads, then you know we have a very serious problem here!

ORS 125.005(5) – “Incapacitated” means a condition in which a person’s ability to receive and evaluate information effectively or to communicate decisions is impaired to such an extent that the person presently lacks the capacity to meet the essential requirements for the person’s physical health or safety. “Meeting the essential requirements for physical health and safety” means those actions necessary to provide the health care, food, shelter, clothing, personal hygiene and other care without which serious physical injury or illness is likely to occur-

All the individuals mentioned at the beginning of this email are united in our unceasing efforts to make as much noise as we can and hopefully, with your help and others in positions of power, put an end to this blatant abuse of our elderly friends and family members. We, the good, honest, caring friends and family will help our friends and family IF they truly need help.

I don’t sleep much anymore, so I have lots of time to scour the internet and read all about this horrific, and epidemic, tragedy befalling the American people. The Senate Special Committee on Aging has been discussing this problem, and I know it’s been going on for decades, but isn’t it about time it stopped !!!

I know you must be very busy, but PLEASE listen to this and see if you think Susan is “Totally Incapacitated”. If you don’t, then a major crime has occurred. A crime against humanity!

Thank You and Stay Safe…Everyone.

The woman in the 26 min conversation (below) was found to be “Totally Incapacitated” 3 1/2 months earlier. Her case stinks of blatant corruption.

Definition of incapacitated – Oregon Legal Glossary – Oregon Laws.org “Incapacitated” means a condition in which a person’s ability to receive and evaluate information effectively or to communicate decisions is impaired to such an extent that the person presently lacks the capacity to meet the essential requirements for the person’s physical health or safety”. Edit 2021/19/07