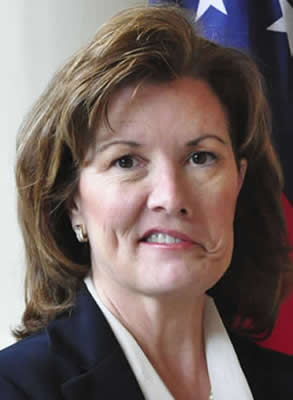 Following a February mistrial Schrader—who lost her bid for reelection in August—was reindicted on six felony counts related to her hiring a private investigator to monitor her computer.

Gwinnett Superior Court Judge Kathryn Schrader, whose trial on felony computer trespass charges ended with a mistrial has been reindicted by a grand jury on six counts.

As Gwinnett County Superior Court Judge Kathryn Schrader’s trial for alleged computer trespassing began, some of the reasons why she thought her computer had been hacked started to emerge.

Opening statements and witness testimony began Tuesday morning in Schrader’s trial, and several witnesses — including District Attorney Danny Porter, Gwinnett court officials, a Georgia Bureau of Investigation agent and Gwinnett IT employees — testified for the prosecution throughout the rest of the day.

Until Tuesday, the reasons for why Schrader believed someone, possibly Porter, was hacking her computer had been undisclosed. Revelations that Schrader had reported several computer issues to the county’s IT department before she decided to bring in a private investigator came to light on Tuesday.

As she sat at the witness stand, Gwinnett County Superior Court Judge Kathryn Schrader admitted to the actions that prosecutors say make her a criminal.

But she rejected the idea that doing so was illegal and echoed the argument that her attorney had hammered away at throughout her trial: she had no choice.

“I had exhausted myself trying to get answers to what was happening to my computer,” Schrader said.

The judge took the stand for nearly two hours Thursday, the final witness on the the final day of testimony in her trial on three counts of felony computer trespass. Schrader’s attorney and the prosecution will deliver their closing arguments Friday morning before the case is given to jurors.

Throughout the trial, defense attorney B.J. Bernstein has attempted to paint her client as an accomplished judge who was concerned about the security of her computer and fed up with what she deemed to be a lackluster response from the county’s IT department.

County employees who testified early in the week characterized Schrader’s technology issues as “common errors.” The prosecution has maintained that Schrader’s actions amounted to illegally allowing outsiders to access, alter and interfere with the Gwinnett County computer network.

Outside experts called by the defense Thursday, meanwhile, testified that there were very real security issues with the county network that Schrader had reason to be concerned about.

“All of the issues she described are potential alarms of a network intrusion,” said computer forensic expert David Kalat.

They also testified that the device installed on Schrader’s computer was “minimally invasive” and merely monitored traffic, without the capacity to alter or otherwise access county data.

Schrader, who has been suspended from the bench pending the outcome of her case, reportedly feared that Gwinnett District Attorney Danny Porter may have been trying to hack into her computer. Porter has denied that allegation.

According to testimony from a GBI agent working the case, Schrader didn’t think county staff was taking her concerns seriously and feared there may have been a “conspiracy” inside the courthouse.

She said that’s why she contacted private investigator T.J. Ward and allowed his men — including one who turned out to be DragonCon co-founder and registered sex offender Edward Kramer — to keep tabs on her computer’s activity.

“I take full responsibility,” Schrader told prosecutor John Regan. “Absolutely. I was there and felt like it was necessary.”

Gwinnett Judge Kathryn Schrader takes the stand in her trial

JOIN THE VICTIMS OF JUDGE KATHRYN SCHRADER CLICK ON IMAGE 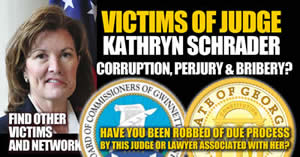