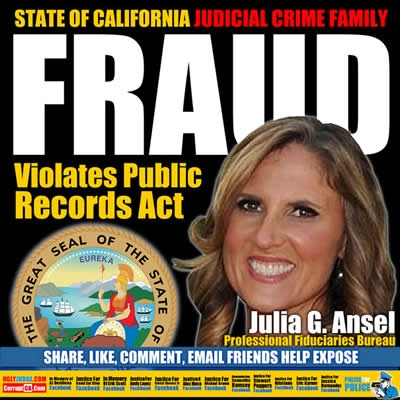 After Ansel misrepresented the law to tye source and was advised of her error, she simply fell silent. No disclosure has been provided.

As long as the “political royals” act as if we mere citizens have no rights under the law, these atrocities will not only continue but will amplify.

Tuesday March 24, 2015, the California Senate Judiciary Committee is holding a public hearing on the conservatorship system. A non-profit, Spectrum Institute has been seeking to protect adult conservatees who are intellectually or developmentally disabled, and they will be presenting. They’re calling for a Task Force to investigate and reform the conservatorship system. They have submitted a report to the Committee about the need for investigation (http://spectruminstitute.org/judiciary-report.pdf) and they have distributed a press release.

Please contact your legislators and spread the word among supporters?