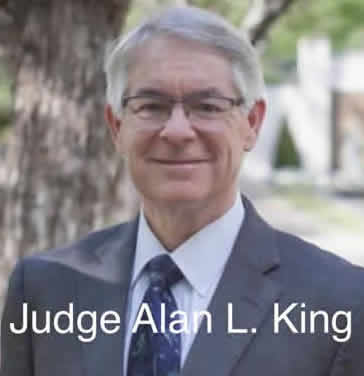 Greedy, dishonorable judges destroy families and lives, their rarely held liable or accountable and often just run away like the cowards they are and retire.

Be sure to see the latest Reuters Articles exposing how a Black Robe has become a license to steal, lie and cheat the public with impunity
THE BIGGER EPIDEMIC IN AMERICA

“I’m sure I’ve made plenty of mistakes.”

Alan L. King, the Jefferson County probate judge who signed off on an order drafted by his longtime pal Greg Hawley that forced an alleged corrupt guardianship and financial control directive upon an 88 year-old grandmother worth $218 million announced his abrupt retirement this morning, according to al.com.

The announcement comes just hours after the release of damning audio files from media outlet Alabama Today of Balch & Bingham partner Amy Adams allegedly telling Joann Bashinsky, known as Mrs. B and the widow of the founder of Golden Flake Foods, could run out of money, lose her home, and have to fire staff.

Greg Hawley, appointed as Conservator of Jefferson County by King in 2013, can be heard rejecting Adams about her alleged false claims, stating he has yet to get a complete, “whole financial picture” but “cannot say” what Adams told Mrs. B.

Even though Mrs. B allegedly refused to hire Balch partner Adams, Hawley hired her under his directive and authority at a cost of $425 an hour.

In January, the Alabama Supreme Court stayed all the shenanigans of King, Hawley and Balch & Bingham.

In today’s announcement, King states, ““I’m not really one to look back and worry about stuff. I’ve worked hard,” he said. “I’m sure I’ve made plenty of mistakes, but none that I really dwell on.”

Like disgraced former State Representative Oliver Robinson, King is foolish to think that “resignation” or “retirement” could impede a criminal investigation. FULL STORY

Individual judges have unquestionable amounts of power and discretion with little to no accountability:

Evans echos the sentiments I’ve heard from a number of people wrapped up in the conservatorship system. It’s designed in such a way that the judge might as well be a God.

In her father’s case, Hawley’s guardianship was initially meant to be temporary. This is a familiar refrain from those with loved ones and family members involved. However, hearing after hearing it became clear that unless something changed, Hawley will be Belew’s conservator for the rest of his life.

Lack of transparency and accountability

Until this week, after five years of Hawley being the conservator, Evans had not had a full accounting of her father’s assets or of the costs associated with the conservatorship. This week Holland provided that breakdown for the first time. You may remember Holland from the first post. Holland is the assistant who sent confidential medical and financial documents to Adams “accidentally”.

It states, “Fees are based off of a percentage of the Estate which in total is roughly 9%. It is calculated only at a Partial and/or Final Settlement Hearing. This is an Alabama State Statute = 2.5% of what’s received, 2.5% of what’s disbursed and 4% attorney’s fees.”

As I mentioned, records indicate that thus far, $15,000 has been paid to Hawley’s firm.

One of the often unspoken problems faced by family members fighting the court orders is the closeness of the attorneys and judges involved in the cases. Evans has had two attorneys paying approx. $22k of her own money in order to fulfill her father’s wishes. The step-mother has also hired an attorney.

The monetary costs aren’t necessarily even the biggest problem for those involved. Many have explained it’s the stress of the unknowns and the time associated with fighting the judge’s order, working through the conservatorship process, and making sure their loved one is taken care of, and not exploited, that is the part that really takes a toll.

“What bothers me the most about the money… my dad was a frugal man who made a good living and lived within his means. He saved so that I and my children could have it. He worked hard for it and scrimped and saved, and now there’s not much left.”

We need to do better as a state. We need to demand our lawmakers require more of our courts. We need more transparency and accountability within the system. We need for families to be kept together and not set against one another. We need change.

Follow this series for more one-on-one stories with those involved in the system here. Beyond those, we’ll be sharing detailed reports of what’s happening here in Jefferson County and how you can get involved to reach out to lawmakers to fix this broken system. FULL STORY

the purported evidence presented to the probate court clearly, and by any standard, did not establish that an “emergency” existed that required action so immediate that the probate court could not allow Ms. Bashinsky an opportunity to respond to the accusations or to retain counsel after the probate court, at the outset of the hearing, dismissed the three lawyers she had chosen to represent her. Consequently, the provisions in the AUGPPA requiring notice, the presence of counsel for the respondent, and an opportunity for the respondent to present arguments and evidence could not be 48-  1190193 circumvented in this instance. See §§ 26-2A-102, 26-2A-103 and 26-2A-134(a), and 26-2A-135.

Any lingering doubt that the situation was not a true emergency is erased by the probate court’s scheduling of the subsequent hearing on the permanent petition. As was recounted in the rendition of the facts, the hearing on the emergency petition was held on October 17, 2019. After the probate court rendered its judgment appointing a temporary guardian and conservator, the probate court scheduled a hearing on the permanent petition for March 12, 2020, five months after the emergency hearing. In a dependency context, removing a child from the custody of a parent without giving that parent notice and an opportunity to be heard requires that a full hearing be scheduled within 72 hours of such a

Permanent Hearing in this matter.” The short duration of such orders underscores that emergency rulings are permitted based on the understanding that the truncation of constitutional due-process rights they entail will be mitigated in short order. The probate court’s decision at the October 17, 2019, hearing not to grant a continuance to allow Ms. Bashinsky to retain new counsel is unfathomable, given the length of the scheduled delay between the hearings on the emergency petition and on the permanent petition. More broadly, the fact that the probate court believed that the matter could wait another five months for a permanent determination starkly illustrates that any potential harm to Ms. Bashinsky’s health, safety, or welfare was not immediate or substantial, i.e., this was not an “emergency” by any reasonable definition.