The Bigger Epidemic they Don’t Talk About 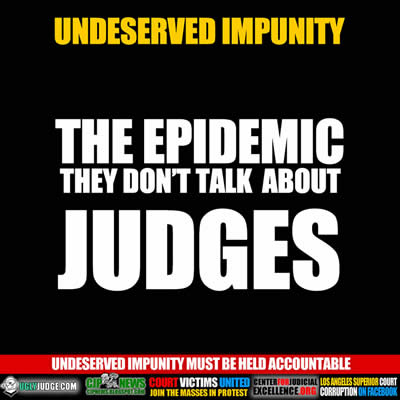 What judges don’t want you to know is the black robe is NOT about honor, morals or integrity. It’s become a license to steal, lie, cheat and even help get away with murder. Judges are commonly bribed via county payments (see Richard L. Fine) and Property loans.

Judges are now Public Enemy number one, nothing more than a lawyer with authority judges have been proven 100% to rule in favor of dishonest parties with money. Millions of victims not just a few are being victimized by bad judgments, illegal actions, perjury, fraud and embezzlement via criminals who hide behind a black rag of shame. The term “Honorable” is useless when before a title of a person who is nothing about Justice, integrity or honor. I found out the hard way by going to court with 100% proof of perjury, fraud, elder abuse and embezzlement of almost a quarter a million dollars. A sure thing but then Judge Candace J. Beason pretended to see nothing. Worse I saw videos of X President of the bar Philip Barbaro Jr. (Pasadena lawyer) dancing with Beason at a judge party plus I got emails exposing Barbaro to to feeding cases to the (forced to retire Exposed by LA Time 2005 Probate Fraud business) judge Aviva K. Bobb. It all pointed to Beason being bribed to rule against evidence, perjury, fraud and elder abuse.

After experiencing what happened to me I created a website “Uglyjudge.com” I was flooded with reports by other victims all over the USA. An Epidemic of rich, poor, young and old not only in Probate courts but all the court systems. An Epidemic that is the norm. Divorce and Family, criminal, civil, probate courts are infected with bad judges who in fact hold seminars for lawyers and judges where they are sharing tactics. What happens when you go public with info about these lawyers and judges? They use their clout with police and have you arrested on false, trumped up charges to terrorize and abuse you. I know because I spend 3 days in Pasadena jail via Avia K. Bobb, Philip Barbaro Jr. and Christopher Overgaard (Lawyer who committed perjury and fraud against me)

NEWS STORIES THAT EXPOSE BEYOND A DOUBT THE EPIDEMIC
Special Report: Thousands of U.S. judges who broke laws, oaths remained on the bench
Inside the Reuters year-long investigation into judicial misconduct across the U.S.
How Reuters examined misconduct by state and local judges across America

VIDEOS
The Right to an Impartial Judge (s8a)

Ethical Misconduct in the Courts