Home » About Us » Psychopath Hides Behind False Image 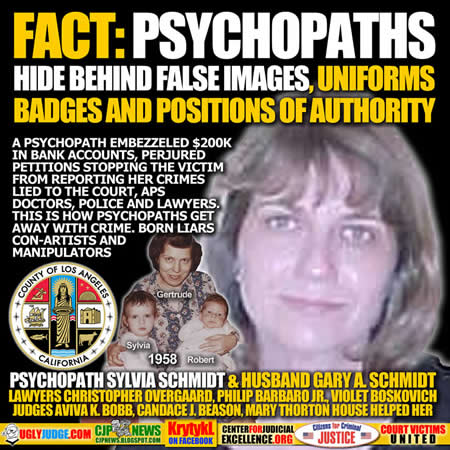 FACT: Psychopath Hides behind False Image and Positions of Authority

My experience with sociopaths and narcissism began the day I was born. Growing up I had not idea what was in store for me or who I was dealing with. The fact was both my sister and mother were very different from normal. While my mother acted like a loving kind woman there was another side of her most people were unaware of. My sister even as a child had an evil side which my mother noticed but did not understand at the time.

As I got older I was told of accounts of jealousy by my sister Sylvia Gettinger aka Sylvia Schmidt where she would try and shove me as an infant off the side of a bed to take over. Then there was the event of her ripping a toy from my hands and slapping me across the face. I never could understand this hate, anger or jealously I was born into.

Yet growing up time and time again events such as this occurred. I quickly became aware of Sylvia’s manipulation and con-artist tactics. Then there was her total lack of empathy and love. She could be a stone cold vicious beast and then all of a sudden act as if she cared.

We were never close because she lacked the capacity to show love or be loved this was very apparent. She drove our family apart when our father Franz L. Gettinger figured out there was something really wrong with her. She took advantage of our mother Gertrude Gettinger any way she could and any chance she had. Yet one could easily see there was no love or kindness for her own mother or sibling.

Our father finally divorces our mother back in the 70’s when it finally became too much to handle. Years later I really began to understand why our father left. Our mother was a narcissist who always had to have her way. Worse she always had to have someone to blame. She would blame you if you did as she asked and blame you if you did not. There was not right thing to do with this woman it was always her way or the highway. The point is anyone being in a relationship with her would end up being mentally abused with her rants. When our father and mother separated Sylvia’s hate and manipulations came out full force. Sylvia would attack the man any time he arrived to visit even baring gifts. I recall Christmas when He arrived with two gifts for us and handed them to each of us. Sylvia threw hers back at him and began cussing at him in the worst, profane degrading language I’ve ever heard. Our father so disgusted by the obvious disrespect for his kindness became too much and he slapped Sylvia across the face. She would use this one event the rest of her life to hate her own father and stoke the flames of hurt with her mother.

Sylvia was a born manipulator and charmer; in fact she finally found a career she was good at as a “Head Hunter”. What a head hunter does is cold call a company and steal their employee’s. I did not see it this way at first but later the more I learned how much money she would make for calling a company and convincing a CEO to depart only to come work for someone else. She did this without knowing or seeing the person just via a few phone calls. People need to understand the charm and manipulation skills at work here.

Sylvia for the next 35 years would never speak to her father again. I always kept contact with our father and had my own opinions about what happened even if constantly Sylvia would try and influence me to hate him.

2000 Franz L. Gettinger passed away and left a small inheritance to me, he left Sylvia totally out of his will. He had tried to make contact with her many times over the 3 decades that had passed since the divorce but Sylvia rejected him every time Sylvia even threatened to never speak to me again if I brought up the concept of her making amends to her father. This is how much she hated him and always said she wanted nothing to do with him.

So it was a huge surprise when she became violently angry when she was disinherited by him. She was only getting what she deserved but Sylvia did not look at it this way. In fact she blamed me for what took place after I was the one who tried to help her make contact with him again. Sylvia had this concept in her head that after all that she had not done she should have gotten 50% of her father’s inheritance. So in her mind she began a hate campaign against me blaming me for everything. She claimed I had brainwashed our father into hating her. This was up absurd because I was the sole person over the years that did the opposite and tried to get them to talk and forgive what had happened. This is an example of the anger and hate that brews in Sylvia Schmidt; she creates problems then blames you for them. Perhaps she learned this from our mother?

Actual audio of phone calls when Sylvia discovered she was disinherited

Hear Sylvia Schmidt call Robert in 2003 via a telephone number she told court she did not have. She is angry because she has been disinherited and does not want to accept its due to no contact with her father for over 35 years. Note the two calls only seconds apart how she changes her tactics to pull at my emotions. One moment she says she really, really loves me and the next she is going to pull the trigger. Typical social-path and psychopath tactics.
Original Audio left on my answering machine
https://soundcloud.com/robertagettinger/00-sylviaschmidt02-07-2003-01
Second call seconds later
https://soundcloud.com/robertagettinger/sylvia-schmidt-calls-back

So I was surprised when Sylvia became angry and blamed me for her being disinherited. This was also the point where Sylvia started her scheme to take over her mother’s estate so the same thing would not happen with her. The fact is Sylvia never had a good, loving relationship with anyone in her family. She would do derogatory things all the time to drive us away from her and then as usual blame us when we did not contact her. I was used to this growing up with our mother who I took care of till 2000 when I got married.

When I got married our mother took this as threat that another woman was taking me away from her. Our mother never had a father per say, she was born out of wedlock and her blood father wanted nothing to do with her. She drove her husband Franz L. Gettinger away with the same blame game. There came a point where our mother gave me an ultimatum that I must choose between my wife and her. During that time she lied, disrespected and created problems with my wife which eventually forced me to move away from her.

This is where Sylvia took advantage of me no longer protecting our mother and being there for her. Sylvia came up with a scheme to burglarize her own mother’s home via the use of a hidden key. Where she would take all the banking, credit card statements, bills, identifications (passport) and address book etc. There’s a LAPD Hollywood division police report that documents this.

With that documentation Sylvia and Gary A. Schmidt would create a false credit collection scheme and remove (2) bank accounts totaling about $200,000.00 and eventually blame  the withdrawn or missing funds on me as she wrote in her petition to force Gertrude Gettinger into a conservatorship against her will in 2006.

The problem then became who’s better at lying and convincing court investigators, doctors, APS, judges and lawyers. Sylvia was even lying to me to stop me from looking further when all of a sudden our mother disappeared from her home.

Slowly the pieces were coming together and I realized I’m dealing with a sociopath, an expert liar who could be charming and at the same time act very innocent and like a victim. Yet she’s nothing more than a common criminal that lacks respect or emotions for her own mother. Even to the point of trying to kill her via over medications so she can ensure she gets her inheritance.

I’m looking for anyone who can help expose what’s going on as I’ve spent my life savings, over a decade or time contacting federal and state authorities, even the IRS, FBI and the DOJ and nothing seems to be done because Sylvia goes back to her original petition where it’s obvious Judge Candace J. Beason was connected in a biased way with the once Pasadena Bar President Philip Barbaro Jr. I even found YouTube videos of the two of them dancing together at a judge’s event in Pasadena. But I can’t buy the same legal team Sylvia can because Judge Beason even allowed Sylvia possession of the entire estate worth over 2 million dollars which not one penny was ever in a blocked account. Beason would say even after filing a petition showing multiple crimes and evidence plus the missing bank account, she sees no wrong.

People need to understand like going to court against a million dollar legal team when you go against an expert liar and manipulator the game is always “Don’t like the message, kill the messenger” which is what Sylvia does to me. I bring all the facts and evidence but she convinces the court and court investigator that I’m the bad guy. This however is not about me, it’s about the life and estate of our mother Gertrude Gettinger who is the real victim. 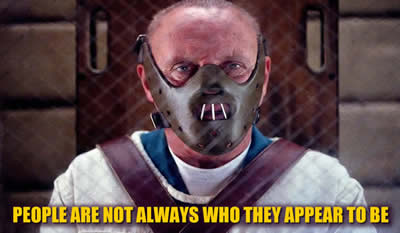 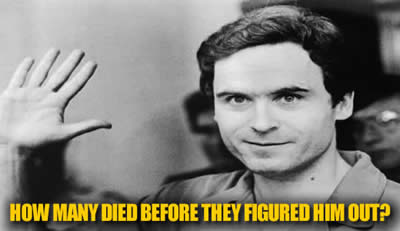 How to Identify a SOCIOPATH

Narcissist, Psychopath, or Sociopath: How to Spot the Differences