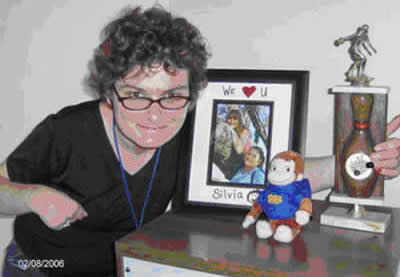 Two years ago, The Public Guardian and Silvia’s attorney entered our home without permission, without a warrant and without notification. These people then performed an illegal search of the home. After they induced Silvia into saying she wished to live in a group home. (Silvia had never seen one.) They petitioned the court to remove her mother as conservator of the person. The court decided that because her mother was paid IHSS funds for her care, this constituted a “conflict of interest”. Silvia has lots of other relatives but none of them were notified by the court or contacted in any way. After two weeks at the group home, Silvia told her Guardian that she would like to return to her family. The change of conservatorship was only temporary at that point. Neither Silvia nor her mother received notification of the hearing date which made the order permanent. Silvia has constantly continued to verbalize the wish to return to her family during the two years. The home she once owned was sold for about $75,000. less than the market value. Her mother who co owned the home and Silvia’s 12 year old sister were forced to move out of the home as a condition of the sale. However, her mother was still responsible for the payments during the 6 months that it took to sell the home. Silvia was removed from a community based program she attended and placed in a sheltered workshop where she had been verbally abused and which has a practice of administering performance reviews of it’s disabled clients in public.

While at the group home, Silvia was not bathed or cared for properly and it was discovered that her room mate was sexually assaulted repeatedly in Silvia’s presence. Only as a result of her mother’s diligence was Silvia removed. Two weeks before Christmas Silvia was again cruelly stripped away from her family. It was the eve of her grandmother’s death and her mother was served with a restraining order obtained by the Public Guardian using false information.