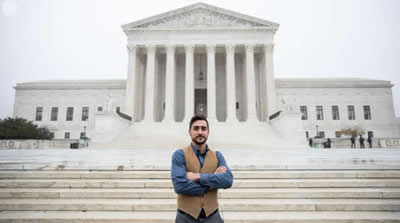 The Assault of James King
A horrific case of police brutality could soon be heading to the Supreme Court. James King was beaten and choked by police in broad daylight, then slapped with three felony charges. He persevered, got acquitted, and sued the officers responsible, only to find himself caught in a legal labyrinth. Now the U.S. Justice Department is urging the Supreme Court to throw out his case entirely, which would thwart justice for James and other victims of excessive force.

Back in July 2014, James was a 21-year-old college student walking to his internship in Grand Rapids, Michigan, when he was approached by two men. After peppering him with questions, the men shoved James against their car. One of the men then grabbed James’s wallet out of his back pocket. James thought he was being mugged. In a panic, he tried to run away and was screaming for onlookers to call the police. But he was quickly tackled, put in a chokehold, and beaten into submission. James briefly lost consciousness.

“When I was being choked, I feared for my life truly,” James recalled. “It was a moment where everything went black. As far as I know, that is as close as you can get to being dead without being dead.”

6 years after a man says he was beaten by undercover cops, the Supreme Court could hear his case