Ryan Austin Mayberry – (State Bar ID: 232622) –The Law office of Todd Rothbard.  Heidi Yauman was repeatedly abused and harassed by Markham Plaza Property Manager, Elaine Bouchard.  Ryan Mayberry and Markham Plaza staff prepared fraudulent affidavits and a mock trial was held in Santa Clara County Superior Court. ( CASE: 1-12-CV226958 ) Department 19 – Judge Socrates Manoukian. ) Heidi Yauman was not allowed to present evidence for her case. The fraudulent documents that were submitted were ruled on, despite the fact that EAH Housing was unable to substantiate a single lease violation.  Lee Pullen authorized payment of attorney fees to his neighbor, Ryan Mayberry paying Mr. Mayberry with money from Heidi Yauman’s estate to commit these acts of fraud. This was misappropriation of funds from Heidi Yauman’s  estate.  A similar thing happened to Reta Cook.   See ABC News Story.   More info on Judge Socrates Manoukian can be found at www.JudgeSocratesManoukian.com

EAH Housing  President and CEO: Mary Murtagh had been notified of the problems at Markham Plaza Apartments yet failed to supervise the activity of her staff and behaves complacently by not holding Markham Plaza staff accountable for their criminal actions against Heidi Yauman. 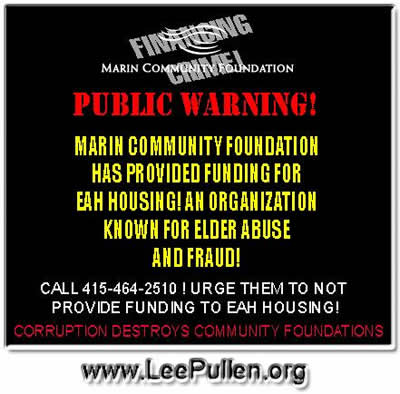 PLEASE URGE EVERYBODY TO NOT DO BUSINESS WITH EAH HOUSING & TO NOT PROVIDE THEM WITH SUPPORT OR FUNDING.