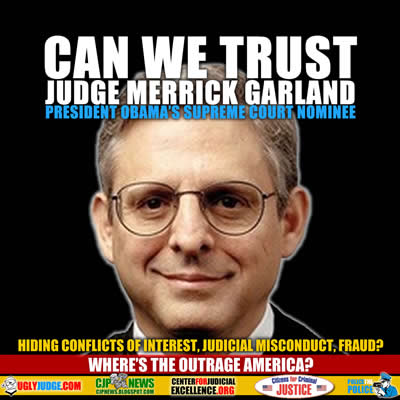 It’s alarming how many bad judges exist in America today. What’s worse is many of them move up in the system allowing even worse judges to follow and more crimes to be committed under the “Color of law”. This is key to what’s destroying justice in America today. Its such greedy, dis-honorable and totally evil people that gain power and use that power against the good of all.

Articles and events which need to be made public

Give Merrick Garland his confirmation hearing, and let me testify against him

Today I filed a judicial misconduct complaint against President Obama’s Supreme Court nominee, Chief Judge Merrick Garland of the U.S. Court of Appeals for the D.C. Circuit. It’s been a long time coming.

As explained in the complaint, Judge Garland and his colleagues have covered up criminal misconduct in the federal courts for more than six years now. You can read the details in the complaint or at DirtyRottenJudges.com, so I won’t rehash them all here, but in early 2015 I filed a judicial misconduct complaint against U.S. District Judge Ellen S. Huvelle because of her role in a $7 million dollar fraud orchestrated by several attorneys in Maryland. That complaint was automatically directed to the chief judge, i.e., Judge Garland, and it was supported with transcripts, medical records, emails, FedEx records, and billing records proving the fraud.

I asked Judge Garland to refer the complaint to another circuit because he had conflicts of interest, as did the other judges on the Court of Appeals. Instead, he referred the case to his Republican colleague, Acting Chief Judge Karen LeCraft Henderson, who is almost as conflicted as he is (she is also named in my latest complaint). My complaint was held in limbo for more than a year – without any investigation – until Judge Hendersondismissed it on February 18, 2016. I appealed the dismissal on March 25, 2016. FULL STORY HERE

A PROBLEM BIGGER THAN MERRICK GARLAND

Judicial misconduct is neither a new nor isolated problem. In 2009, the Houston Chronicle published an investigative series about the failed system of oversight for the federal judiciary, and nothing has changed since then. The Chronicle series was prompted in part by the case of former U.S. District Judge Samuel Kent, an alcoholic who sexually assaulted female employees in the federal courthouse in Galveston. After the victims filed misconduct complaints against Kent, the Fifth Circuit Judicial Council in New Orleans initially reprimanded Kent for generic “sexual harassment” and suspended his case load for a few months.

But for the dogged reporting of Chronicle reporter Lise Olsen, we might not have known that his “sexual harassment” included a full-blown sexual assault, e.g., tearing the clothes off of a female employee and putting his mouth on her breast. After Olsen exposed the magnitude of Kent’s crimes, the Fifth Circuit finally recommended impeachment, and Judge Kent later resigned after being convicted of a criminal charge and impeached by the House of Representatives.

The Kent case seems to fit a pattern: the judiciary ignores or downplays judicial misconduct until someone exposes the cover-up and the judiciary is shamed into doing the right thing. I suppose sociologists or anthropologists could explain the phenomenon in terms of class or tribal loyalty, but regardless of what you call it, too many judges are far too willing to cover up a crime in order to protect a colleague from embarrassment. In the Kent case, the cover-up happened on the watch of a female chief judge, i.e., Edith Jones of Houston.

If you’ve followed this blog, you know about my ongoing battle with U.S. District Judge Walter S. Smith, Jr., another alcoholic who grabbed and groped a female courthouse employee. Since I had already deposed the victim (and published the transcript on DirtyRottenJudges.com), Judge Smith’s colleagues could not easily ignore his misconduct, although they certainly tried to downplay it. As I reported on February 17, 2016, it appears that Judge Smith’s colleagues tried to contain the scope of the scandal by ignoring his other victims (yes, there are several more female victims).