How to hide behind an Image and get away with it 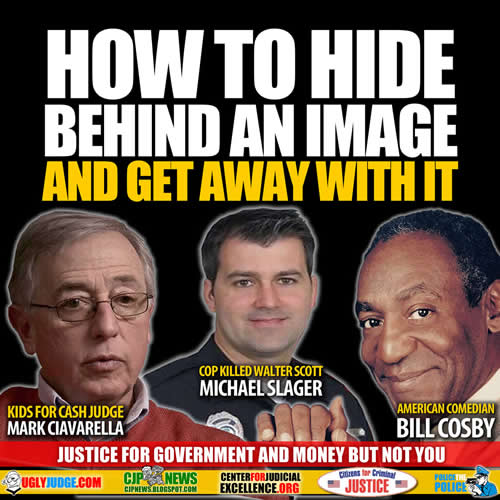 How to hide behind an Image and get away with it

The fact remains that the wrong people get hired or become role models. They hide behind a postitive image or authority figure. Even when multiple victims come forward our courts and government refuse to prosecute or objectively invesigate. Think about the hundreds of victims of Judge Mark Ciavarella the “Kids fo Cash Judge” and how long it took for government to investigate and act. Even with a “smoking gun video” of killer cop Michael Slager courts refuse to hold him fully accountable. Our courts are based on money and greed not justice and integrity just look at Bill Cosby or O.J. Simpson. How much justice can you afford? How can money help the wrong people win in court even if guilty?

Bill Cosby
American comedian and actor, is currently knee-deep in sexual assault allegations. Approximately 56 women have come forward claiming that Bill Cosby raped or sexually assaulted them a few decades ago. The trial has begun, and as of now, Cosby has denied all allegations. The trial specifically regards the alleged drugging and raping of Andrea Constand in 2004, one of many accusations against Cosby.

On September 6, one of Cosby’s lawyers, Brian McMonagle, stated, “Mr. Cosby is no stranger to discrimination and racial hatred, and throughout his career Mr. Cosby has always used his voice and his celebrity to highlight the commonalities and has portrayed the differences that are not negative, no matter the race, gender and religion of a person.” McMonagle also said of lawyer Gloria Allred, who is representing many of the women who have accused Bill Cosby as of this time, [Allred] calls herself a civil rights attorney, but her campaign against Bill Cosby builds on racial bias and prejudice that can pollute the court of public opinion. He further stated, “And when the media repeats her accusations with no evidence, no trial and no jury we are moved backwards as a country and away from the America that our civil rights leaders sacrificed so much to create.” These statements were made to reporters outside the courthouse. It is not known whether the defense will use racial bias as a defense tactic during the official trial. Despite the defense’s recent argument of a racial bias against the comedian, Bill Cosby in the past has spoken openly about racism not being a legitimate reason for many disadvantages African Americans face. In a 2004 NAACP speech, Bill Cosby said, “These are people going around stealing Coca-Cola. People getting shot in the back of the head over a piece of pound cake. Then we all run out and are outraged: The cops shouldn’t have shot him. What the hell was he doing with the pound cake in his hand?”

Though racial bias is truthfully seen in many trials, Bill Cosby’s trial is not one where racism can be used as a tactic in his defense. An incredible amount of women have spoken out about being victims, and even if half of the allegations were untrue, Bill Cosby would still have approximately thirty accusations against him. These are colossal numbers and it is difficult to imagine that these women are behind a racist conspiracy with the goal to tear down one of the most esteemed African-American actors of our time.

How many millions has Bill Cosby spent on lawyers, propaganda and court to suppress the truth and justice?

NEWS STORIES
Bill Cosby, The Race Card And OJ Simpson
‘Cosby Show’ co-star Joseph C. Phillips: ‘Of course Bill Cosby is guilty’
THE ONE ACCUSER WHO MAY FINALLY BRING BILL COSBY DOWN FOR GOOD
Bill Cosby Admits to Sex with Teenagers, Paying Off Alleged Victims in Explosive Deposition Excerpt
OF COURSE BILL COSBY IS GUILTY!
Bill Cosby admitted to getting Quaaludes to give to women
The New Case Against Bill Cosby Is Mostly Based On Evidence Authorities Had All Along
Cosby Unraveled – all episodes

Cosby Rape Victim Strikes Back At The View Host. This is the problem, just because someone is not in jail does not mean their innocent

The scandal was dubbed “Kids for Cash” when it was revealed that Judge Mark Ciavarella and former Judge Michael Conahan received $2.8 million in so-called “finders fees” from a for-profit juvenile detention center, in return for helping to fill its cells.

The story behind a corruption scandal so brazen and cruel it defies imagination. Between 2003 and 2008, two Pennsylvania judges accepted millions of dollars in kickbacks from a private juvenile detention facility in exchange for sending children — girls and boys, some as young as 11 — to jail.

Federal prosecutors accused Judge Mark Ciavarella and a second judge, Michael Conahan, of taking more than $2 million in bribes from Robert Mericle, the builder of the PA Child Care and Western PA Child Care detention centers, and of extorting hundreds of thousands of dollars from Robert Powell, the facilities’ co-owner. Judge Mark Ciavarella took the cash while filling the beds of the private lockups with children as young as 10, many of them first-time offenders. Mr. Conahan pleaded guilty and awaits sentencing.

Officer Michael Slager who shot Walter Scott in the back on video and then lied about it.
How the system is set up to help officers make up false stories and rationalize murder. Thr first video covers how officers are treated after killing someone and how the public is treated after allegitally committing a crime. The double standards, friends investigating friends and how a broken justice system run by friends and based on money helps killer cops get away with murder.

The civil rights offense has a maximum penalty of life in prison. The plea agreement states that the government will ask the court to apply sentencing guidelines for second degree murder, which carries up to 25 years in prison. Officer Michael Slager was taken into custody after the hearing and will remain there until sentencing later this year.

“No matter how many years Officer Michael Slager gets, it would not bring back my son,” she said. “This is a victory for Walter Scott. This is justice for the family, but this is just the beginning.”

The big key now is will Officer Michael Slager be held accountable like anyone else or will his status as a peace officer held him escape full punishment?
Will he get the death penality or will the courts help a murderer get away with a crime?