258 Days in Jail, No Trial, No Affordable Bail 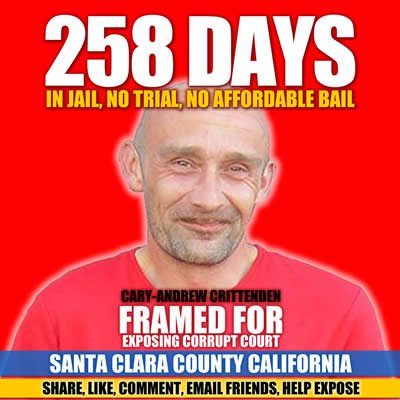 258 Days in Jail, No Trial, No Affordable Bail

Think it can’t happen to you? It happens all the time. Jail and so called legal investigations which often take place for no valid reasons are how government and police terrorize the public. What would happen to your home, car and family if you were innocent but accused and locked away for 258 days?

This happened and is still going on for Cary-Andrew Crittenden by the Santa Clara County District Attorney office. With the help of two police officers who apparently have made up their own facts via their own police reports.

More on Santa Clara County Prosecutor Barbara Ann Cathcart who has a history of victimizing people at tax payer expense. SEE HER STORY regarding Henry Sires.

This is common and what happens to anyone who exposes police, judges or government who break the law or commit crime. The problem is who prosecutes the prosecutors? The other issue is when one person commits perjury everyone within that department or government sector ignores it.

This has been proven time and time again with documented cases such as this:
Bogus charge, 96 days in jail in Mississippi for a 34-year-old mother, and no justice

Courts and police are out of control abusing their power and terrorizing people to stop them from exposing corruption. While America and the media has it’s attention on Syria more people in America are being terrorized than ever.

New Eastern Outlook provides a daily analysis on the world affairs and events with focus on MENA and Asian countries.  HERE

More at this LINK

How everything started and Cary got involved:
Crime exposed by Cary-Andrew Crittenden
The victimization of mentally disabled Heidi Yauman October 2012

The death of Markham Plaza tenant cover up Robert Moss

Heidi Yauman was evicted. Not Mr. Crittenden. Police Officer Robert Ridgeway filed a fake court pleading in Judge Manoukian‘s court to defraud Heidi of her housing at Markham Plaza (1-12-CV-226958)  Then in 2014, Officer Ridgeway, his wife and Detective Carroll filed a false police report which led to the arrest of Mr. Crittenden on September 16th ( Case: C1493022 )

Detective David Carroll was taken off the case after it had been revealed that he lied on a police report and fabricated evidence, then Detective Samy Tarazi replaced him. The internal affairs case for Detective Carroll is 2015-09 and this is under internal affairs sergeant: Alfredo Alanis His email address is Alfredo.alanis@sheriff.sccgov.org

Assistant DA James Leonard knew (or should have known) that evidence and reports for the case were , in fact fabricated but he still let them get submitted into court record as if they were “fact.”

There were several other officers involved. The two mentioned above are of the Santa Clara County Sheriff’s department and under the supervision of sheriff lieutenant Elbert Rivera.. (Badge# 1789)

Command officers such as Rivera are responsible for supervising all those beneath them in the chain of command and like Leonard, Rivera knew or should have known that these reports were falsified and evidence was fabricated to this case.

Exposing allegations of false statements on page 3, lines: 21 and 22 in Sheriff dept.  Report: by detective Samy Tarazi in which detective Tarazi misclassified evidence, and falsely claimed images were “harassing and annoying” and in violation of restraining order (PC 166(a)(4)

It’s  further alleged these false statements ( along with other statements such as in page 3 lines: 3-7) were used to fabricate probable cause for false arrest which occurred on March 24th, 2015.

Probation Officer Michele Martin is rubber stamping fake probation violations based on false and fabricated police report by Detective Samy Tarazi. She then uses the false police report by Detective Tarazi and recommended to the court that Mr. Crittenden be prohibited from using the internet ( So therefore, Michele Martin is trying to prevent Crittenden from exposing corruption and advocating for crime victims )

Laura Garnette may be involved because as probation chief, she is responsible for the behavior of all probation staff. As Michele Martin’s boss, she should not allow behavior such as rubber stamped fake violations.

They are also FABRICATING FAKE PROBATION VIOLATIONS. ( Demanding Mr. Crittenden give password to Heidi Yauman’s computer which was stolen by Detective Samy Tarazi ) – Heidi is not on probation and is terrified of Sheriff’s department after being terrorized by Detective David Carroll.

The Probation Department is facilitating the stalking and harassment by District Attorney and Sheriff’s Department.

More detailed info on how it all got started HERE

Watch the show below for the entire story and more info

Janet Phelan show with more info on the corruption

Santa Clara County Public Guardian Violates Fair Housing Act under HUD Jurisdiction.. The video below shows evidence of how those involved may be connected with an even bigger problem

Cases with similar courts and dishonest law enforcement
Prosecutorial and police misconduct are often dismissed as just a few bad apples doing a few bad apple-ish things. But what happens when it’s entrenched and systemic and goes unchecked for years?

Between San Diego and Los Angeles is Orange County, California. With more than 3 million residents, it’s larger than 21 states. If Orange County were a separate country, its economy would be the 45th largest in the world. Now known for Disneyland, the county may soon be known for having one of the most corrupt justice systems in the world. The width and depth and duration of the corruption truly boggles the mind. A case that should’ve been open and shut has blown the lid off some deep secrets.

On October 12, 2011, Orange County experienced the deadliest mass killing in its modern history. Scott Dekraai killed 8 people, including his ex-wife, in a Seal Beach beauty salon. He was arrested wearing full body armor just a few blocks away. Without a doubt, Dekraai was the perpetrator. A dozen surviving witnesses saw him. He admitted to the shooting early on. Yet, nearly four years later, the case against him has all but fallen apart.

It turns out that prosecutors and police officers committed an egregious violation of Dekraai’s rights—so much so that Superior Court Judge Thomas Goethals shocked everyone and removed the Orange County District Attorney’s Office, and all 250 prosecutors, from having anything more to do with the case.

Judge disqualifies all 250 prosecutors in Orange County, CA because of widespread corruption

Sent to us in an email:

In Santa Clara County, Cary-Andrew Crittenden was railroaded for a crime he did not commit after exposing what appeared to be several court cases deliberately mishandled by Judge Socrates Peter Manoukian. Crittenden was mis- led by deputy public defender: Jeffrey Dunn who misrepresented the meaning of the statute which Crittenden was accused of violating. Mr. Crittenden pled no contest, believing that he may have inadvertently violated an obscure law.

Crittenden was later re-arrested for publishing a news article about how he was targeted by the Santa Clara County District Attorney’s office. The district attorney retaliated against Crittenden for exposing the prosecutorial misconduct that occurred in case C1493022 and filed a restraining order against Crittenden The district attorney named himself a “victim” on restraining order on the grounds that the news article that was published caused him embarrassment.

Because the district attorney is named “victim”, the Santa Clara County Public defender’s office has prepared motion to disqualify the District Attorney on the grounds that being named as ” victim” creates a conflict of interest issue. The motion recommends the court allow the case to be heard by the California State Attorney General’s office.

The motion is scheduled to be heard in Santa Clara County Hall of Justice on July 31st, 2015 in department 52 before the honorable Judge Michele McKay-McCoy. McKayMcCoy@comcast.net

More reports are coming in about James Leonard harassing people with fake restraining orders and cheating on court cases. This one here, the Todd Burpee case is significant because people coming forward believe that James Leonard mishandled DNA evidence to secure Burpee”s conviction.

Hello Sir,
My friend Rhonda Engel was living at the Markham Plaza apartments in San Jose inwhich you are well familiar from your articles. She was on the fourth floor in apartment 409 and had been denied ADA accommodations and had numerous heath problems. She was trying to work with the Markham Plaza Tenant association who was trying to get her help. Management told her Judge Manoukian had ruled in 2012 that tenant associations were against the law.  As a result of this and denial of her ADA request Rhonda  passed away on April 24th of this year after they prevented her from getting help and threatened those people kind enough to want to try to help.
Appalled at the negligence, I decided to ask around  and conduct some internet research and learned about the death of Robert Moss in 2012 which happened with very similar circumstances with harassment by management and ADA denial. I also spoke with residents and confirmed these things are true.
This is to one of your links from your website https://uglyjudge.com/santa-clara-county-hiding-deaths-robert-moss-charles-copeland/ among dozens of other articles all over the internet such as http://eahhousingevictionfraud.wordpress.com/robert-moss/
Rhonda died in 409, the exact same apartment where Robert Moss died and the circumstances were very similar with both deaths. Residents at the Markham Plaza apartment complex are being threatened to not talk about how Rhonda died and told they will be evicted if they cooperate with HUD investigation.
Rhonda moved in Robert’s apartment after he died then she died. I also learned that 3 people died in apartment 130 and 2 people died in apartment 429.
Thank you for the good work you do and for the wonderful public service you provide.  Can you please help continue expose those responsible and share Rhonda’s story so it does not get buried like they did with Mr. Moss.  Unfortunately I live in the area and have two young children and I am scared to death that Santa Clara County Sheriff Department may try to harm them.
I strongly believe that if authorities had properly investigated and prosecuted Robert Moss’s death, then Rhonda would still be alive today. This needs to be made widely known.
The Markham Plaza tenant association has all the documentation you need and their contact phone number is 669-244-3169 and their email address is markhamplazata@gmail.com
Please feel free to forward my email to others with knowledge or have had involvement with these unscrupulous people.
Sincerely,
Cindy Alvarez
R.I.P. Rhonda Engel,
7/26/1960-4/24/2018

PLEASE SIGN THE PETITION stop the conflict of interest, see video below