What is Santa Clara County Court Barbara Ann Cathcart trying to Hide from the Public?

By admin California, Court, Facebook, Government, How to Expose them, Judges, Law Enforcement, Lawyers, Lawyers, Links, Police, Real Heroes, Uncategorized, Victims, Who is UGLY, Who to Report them to 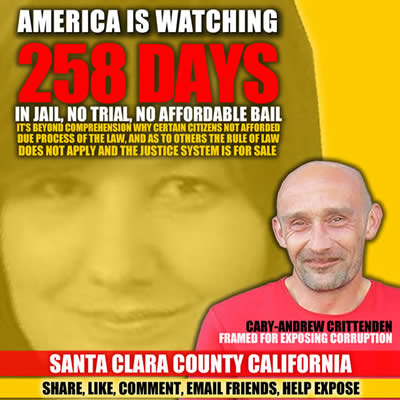 What is Santa Clara County Court Prosecutor Barbara Ann Cathcart trying to Hide from the Public?

See how this all started via the video and emails at the bottom of the page. How facts of the case against Mr. Crittenden are built on lies and false events

Is the victim Cary-Andrew Crittenden now being extorted or blackmailed by the court to shut him up? Is he being threatened with a gag order as to stop him from exposing the very court and county which caused him to speak out?

We’ve been following the Cary-Andrew Crittenden false arrest from the beginning.

The internet is exploding with info about victims of Santa Clara County Corruption with such web sites as Jane and John Q. Public

Written by a legal professional and perfectly stated:

I want it understood very clearly. As a citizen of the United States of America I have the absolute right to not only discuss, but to comment on any trial or other political or content related matter without interference from any Court lacking jurisdiction over me. While Mr. C has not been in touch with me, based upon my reading to the First Amendment and the Constitution of the United States of America he has an absolute right to do so. I practiced law for more than fifty years and therefore to deny him access to an expert or ignoramus to consult is a denial of EQUAL PROTECTION OF THE LAW per se.

It is beyond my comprehension why certain citizens not afforded DUE PROCESS OF THE LAW, and as to others = the Rule of Law does not apply and the Justice System if FOR SALE, TO WIT:

Bribing a judge, a politician, or a public official today does not start and end with handing the corrupt establishment political figure with a white envelope filled with cash. Today it is much more subtle – and it has been more subtle for many years.

In the 1970’s when I was representing Citizen’s Schools in an injunction suit against the Chicago Board of Education in connection with the School Districts threat to keep the Schools open in the event of a strike with recruited neighborhood volunteers, shortly before the case was called on the ladies from the Chicago, Illinois branch of the League of Woman Voters informed me that on that very morning the CPS had hired the Judge’s wife to a very lucrative employment contract. The ladies were irate (justifiably so) at the obvious open and notorious bribe! (I called the Judge out and CPS agreed to not engage in the conduct that was objectionable to my clients – the employment contract to the Judge’s wife was also withdrawn)

Chicago has a history of corrupt election process and the tampering with the elections. It is almost ludicrous to hear the hue and cry that was raised when Mr. Trump called attention to this FACT. I understand the CBS news is advertising that they are this week doing a story on how Chicago’s dead citizens still vote.

All the foregoing is interesting and disgusting in the grosses sense. Vote fraud, no matter whether or not the Establishment political souls acknowledge it or not is a reality and seriously endangers our electoral process. The cancer is one of the proximate causes of ELDER CLEANSING and a danger to not only the elderly and the disabled but every one of us. However, Today’s Wall Street Journal and other media outlets reveal a unspeakable crime that crosses the red line.

You can search the case summary at THIS LINK
Enter “Crittenden” into last name and “Cary” into first name search options: 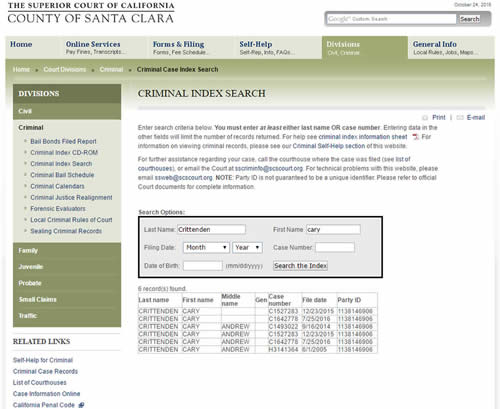 Further it’s come to our attention that one of the Police officers Samy Tarazi who is supplying information to the court via his own departments police reports has had legal issues before. See the lawsuit against Officer Samy Tarazi which includes the County of Santa Clara Samy-Tarazi-Lawsuit

Above video is San Jose Police Department response to an assault with deadly weapon incident  at Markham Plaza Apartments in San Jose. The weapon was large butcher knife.

This was part of a pattern of incidents at Markham Plaza which included another incident where a person was actually stabbed.

Robert Ridgeway was responsible for security & maintaining cameras. The residents turned to me for help because staff was unresponsive to residents concerns about these safety issues.

Detective David Carroll called me several times on the phone and threatened me that I would be arrested if I brought these matters to the attention of US dept. of Housing and Urban development & forbade me to not bring attention to this on the internet.

After judge Peter Socrates Manoukian got involved, the crisis at Markham Plaza escalated dramatically into an emergency situation and one of the residents, Robert Moss was found dead almost immediately after the fraud in case 1-12-CV226958 They threatened to arrest me for trying to get him groceries and they claimed that the Cathedral of faith church in San Jose was a terrorist organization because they offered the residents access to job coaching / resume writing workshop.

In attempt to keep out the news media, they accused Dan Noyes of ABC News of threatening to kill one of the residents and this is stated ON THE COURT RECORD to 1-12-CV226958.

Just to give you some background & hope you can understand my frustration.

My job as tenant rights activist is to address these health & safety concerns and keep the public safe.

Here is a video from 4/17/11, which Detective David Carroll insists never
happened:

I had left work and responded to Markham Plaza to protect Heidi from a
woman named Kimberly Cano who was running down the hall with butcher knife
trying to kill another resident..

This is the SECOND TIME in months that Ms. Cano had done this.
Management’s failure to address this serious health & safety issue
endangered all the residents.

These incidents are logged with 2 San Jose Police Incident Numbers, A
criminal case number for arrest on first incident and for the second
incident, an unlawful detainer case the following day on 4/18/11. Also on
4/18/11, Heidi received “Violation Notice” on her door alleging that I
resided there. This was a retaliatory act strictly prohibited by FEHA.

I responded to Markham Plaza from 1650 Pomona Avenue where, at the time,

I was working on Federal Court case that involved reverse mortgage /
bankruptcy and because this was a bankruptcy proceeding, all expenses
needed to be logged ,with Bankruptcy Court and U.S. Trustee. These include
the expenses paid to me for the work that I did, when the work was done and
just because Orry Korb insisted that the Mayberry/Kubo record was true, you
cannot explain why completely different accounts are in federal court which
can be confirmed by contacting Hon. Judge Weisblott.

Orry Korb is adamant that this never happened, and insists that the
coalition fabricated the incident to use an an excuse to harass Mr. Korb
with frivolous whistleblower complaint against Larry Kubo.
On several occasions. Detective Carroll called me and specifically
prohibited me from contacting Orry Korb or US Dept. of Urban Development.
In his distorted, perverted, toxic logic, this was supposedly because “Kubo
could not suppress evidence that did not exist'”.

This pattern of events is well well documented and we can prove, not only
that this incident occurred, but also that it was misrepresented on
official court documents confirmed by Mr. Mayberry that on same date, Heidi
received notice.

We can also prove, and have repeatedly proved that Larry Kubo received
this evidence and yet, Deputy County Counsel Larry Kubo override Heidi’s
answer to unlawful detainer with another which erased the incident. Earlier
on, the whistle blower complaint was received by Acting County Counsel Lori
Pegg.

Orry Korb then became County Counsel and Lori Pegg was appointed to the
bench as Superior Court Judge. Lori Pegg then handled a search warrant
against me based on fabricated nonsense which she personally was aware of
because she, as County Counsel oversaw the Larry Kubo’s role in the scandal.

The findings to the whistleblower complaint were returned claiming that
County counsel Supervisors were not responsible for subordinate attorney’s
while in court, because it was a “separation of powers issue” and that Rule
3-110 therefore did not apply. I was supposed to “accept findings as true”
and deal with the fact that investigation was not Public record

I obtained copy of policy / Procedure via CPRA which stated that pursuant
to Ord. No. NS-300.809, § 1, 3-23-10, the complaint must be handled by
County Executive because Larry Kubo is a County Counsel attorney.

I contacted Mr. Korb and notified him about Mr. Kubos improprieties
involving Suppression of evidence and placing the residents in danger.

Mr Korb adamantly insisted that the knife attacks never happened and that
Code enforcement complaint also, was another hoax irrelevant to the Fair
Employment and Housing Act.. ,

While Mr. Korb was busy manipulating himself, he accidentally admitted
that he had lost documents on Heidi’s ADA accommodations from July 2012 that
CCO must retain for three years.

I explained to Mr. Korb that I did not appreciate being lied to & that he
was placing the residents in danger. I had copies of these same documents
faxed with receipt confirming that they also were received by County
Counsel and scanned to PDF and that I was going to distribute the documents
throughout the coalition

The following Day, Detective David Carroll contacted me by phone and
ordered me not to report any of the crimes at Markham Plaza to HUD or
County Counsel & that I would be arrested if I advocated for Heidi or the
other Markham Plaza residents.

What is astounding to me is that 3 officers have just been charged with
killing an inmate. Detectives vid Carroll and Samy Tarazi’s are just as
dangerous if not more than these officers.

It is people like Public Defender’s office who bent over backwards to
defend these reckless dangerous actions & are completely oblivious to the
wretched pain and suffering caused and the danger you are placing people in.