Home » State » Arizona » Hillary Clinton With Liberty and Justice for All

Hillary Clinton With Liberty and Justice for All 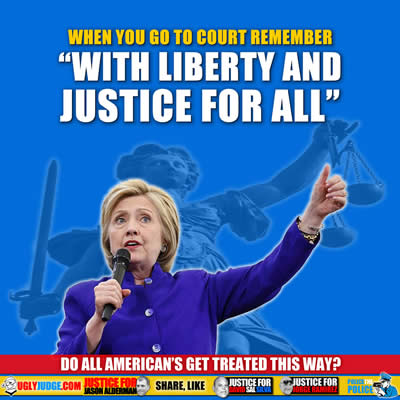 Hillary Clinton With Liberty and Justice for All

If you remember anything the next time you go before a judge in America remember Hillary Clinton and how she was treated by the justice system.
Powerful people such as Police officers, judges, lawyers and government all benefit from the doubt while the normal citizen is often terrorized and abused by our courts. Don’t think this happens? Read the posts on this site, we get hundreds of victims on a daily basis reporting corrupt judges, attorneys, police officers and government. It’s that bad. Do we have a choice? Are we told the truth about the candidates or is everything manipulated by the courts to fit an agenda

The Republican Party is accusing the State Department of “stonewalling” a request to obtain the missing emails belonging to an information technology staffer who helped maintain Hillary Clinton’s private server, suggesting the delay is part of a “cover-up to protect” the Democratic presidential nominee.

New documents, first seen by ABC News, show that the State Department has not responded to a months-old request from the National Archives and Records Administration (NARA) to explain why it has so few email records belonging to the senior staffer, Bryan Pagliano, who worked at the department as a political appointee from May 2009 to February 2013.

During the course of Clinton’s email imbroglio, Pagliano developed a reputation as quiet insider with knowledge of Clinton’s controversial email configuration. He signed an immunity agreement with the Justice Department in exchange for cooperating with FBI investigators examining Clinton’s use of that private email server and has invoked his Fifth Amendment rights hundreds of times in response congressional and legal inquiries. In May, the State Department announced it couldn’t find any evidence that Pagliano had turned over his emails prior to leaving the department, which he would have been required by law to do.