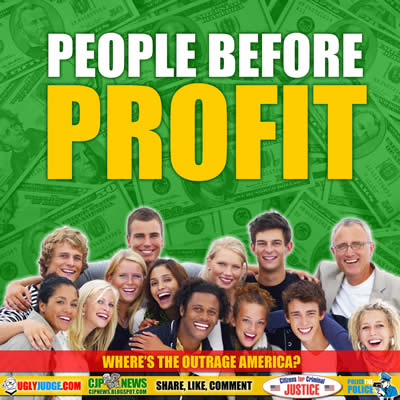 Our courts are about profit not justice, judges are about money not about justice. Who ever can buy LAW or has the most money gets justice even if it’s not really fair or moral.

It’s that SIMPLE. Big business is putting profit over the lives of Americans. Big business which by example the WAR INDUSTRY is making profit from killing. They hide their crimes and lies behind words like FREEDOM and fighting for YOUR FREEDOM. In reality its about the bottom dollar and getting the sheep to go to slaughter without them putting up a fight. Share, Like and repost LIKE THEI PAGE https://www.facebook.com/peopleb4profit/
The concept is spreading like wildfire http://www.forbes.com/…/entrepreneur-dale-partridge-launc…/…

About People Before Profit Alliance

The People Before Profit Alliance was formally established in October 2005 by workers from a variety of local campaigns. Its aim is to reverse neo-liberal policies which place wealth creation for the few over the welfare of communities in Ireland.

The Alliance represents a different form of politics, fitting for the 21st century. It sees ‘people power’ and the mobilization of citizens in workplaces, communities and on the streets as the key to bringing change in society. It is the ambition of the Alliance to operate on a 32-county basis and to offer a radical vision for our country.

In addition to its aim of deepening the links between community groups, the Alliance also wishes to explore the potential for electoral politics but it is not interested in electing people who will join coalition governments with the dominant right-wing parties because they have all signed up to the ‘business success is paramount’ ethic.

The alliance opposes neo-liberal policies, including: – the sell-off of Ireland’s natural resources; – the privatisation and run down of public amenities; – the destruction of the environment and our heritage through a flawed planning process; – the prioritization of corporate profit above the environment; – poor public health and labor conditions and standards; – widespread corruption; – the erosion of civil liberties; – tax cuts for the rich and corporations while bin charges and stealth taxes rise for the majority; – the erosion of neutrality through the growing presence of US troops in Shannon (we oppose the use of Irish airports and airspace by the US military); – the mistreatment of immigrants.

What We Stand For