Stop Warrantless Spying on the Public 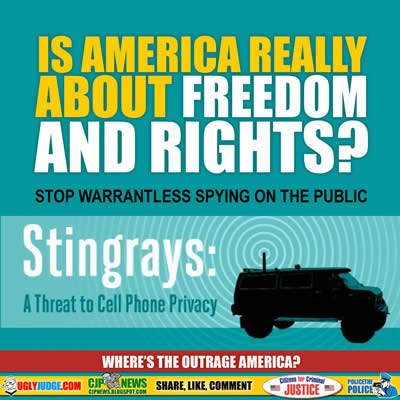 Stop Warrantless Spying on the Public
Did you know hundreds of thousands of your tax dollars are being spent behind your back on equipment to spy on you and your family?
What is Stingray

Harris Corporations Stingray surveillance device has been one of the most closely guarded secrets in law enforcement for more than 15 years. The company and its police clients across the United States have fought to keep information about the mobile phone-monitoring boxes from the public against which they are used. The Intercept has obtained several Harris instruction manuals spanning roughly 200 pages and meticulously detailing how to create a cellular surveillance dragnet.

Harris has fought to keep its surveillance equipment, which carries price tags in the low six figures, hidden from both privacy activists and the general public, arguing that information about the gear could help criminals. Accordingly, an older Stingray manual released under the Freedom of Information Act to news website TheBlot.com last year was almost completely redacted. So too have law enforcement agencies at every level, across the country, evaded almost all attempts to learn how and why these extremely powerful tools are being used — though court battles have made it clear Stingrays are often deployed without any warrant. The San Bernardino Sheriff’s Department alone has snooped via Stingray, sans warrant, over 300 times.

LONG-SECRET STINGRAY MANUALS DETAIL HOW POLICE CAN SPY ON PHONES

The map beloTurns Out Police Stingray Spy Tools Can Indeed Record Callsw tracks what we know, based on press reports and publicly available documents, about the use of stingray tracking devices by state and local police departments. Following the map is a list of the federal agencies known to have the technology. The ACLU has identified 68 agencies in 23 states and the District of Columbia that own stingrays, but because many agencies continue to shroud their purchase and use of stingrays in secrecy, this map dramatically under represents the actual use of stingrays by law enforcement agencies nationwide.

Stingrays, also known as “cell site simulators” or “IMSI catchers,” are invasive cell phone surveillance devices that mimic cell phone towers and send out signals to trick cell phones in the area into transmitting their locations and identifying information. When used to track a suspect’s cell phone, they also gather information about the phones of countless bystanders who happen to be nearby.
Click on the image below for states who have Stingray 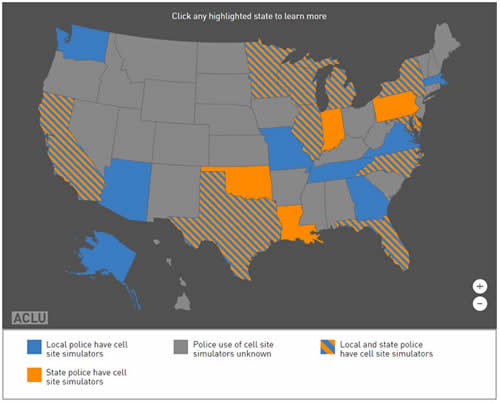 THE GOVERNMENT’S USE of a controversial invasive technology for tracking phones just got a little more controversial.

The Anaheim Police Department has acknowledged in new documents that it uses surveillance devices known as Dirtboxes—plane-mounted stingrays—on aircraft flying above the Southern California city that is home to Disneyland, one of the most popular tourist destinations in the world.

According to documents obtained by the American Civil Liberties Union of Northern California, the Anaheim Police Department have owned the Dirtbox since 2009 and a ground-based stingray since 2011, and may have loaned out the equipment to other cities across Orange County in the nearly seven years it has possessed the equipment.

“This cell phone spying program—which potentially affects the privacy of everyone from Orange County’s 3 million residents to the 16 million people who visit Disneyland every year—shows the dangers of allowing law enforcement to secretly acquire surveillance technology,” Matt Cagle, technology and civil liberties policy attorney for ACLU-NC, wrote in a blog post about the new documents.

Stingrays and Dirtboxes are mobile surveillance systems that impersonate a legitimate cell phone tower in order to trick mobile phones and other mobile devices in their vicinity into connecting to them and revealing their unique ID and location. Stingrays emit a signal that is stronger than that of other cell towers in the vicinity in order to force devices to establish a connection with them. Stingrays don’t just pick up the IDs of targeted devices, however. Every phone within range will contact the system, revealing their ID.

They not only pick up trackable data from phones; Stingrays and Dirtboxes also can disrupt phone service for anyone in their vicinity whose phone connects to the devices. This means that potentially millions of people in Orange County had their phones unknowingly connected to government surveillance devices and may have experienced service disruption as a result. Last year an FBI agent admitted the disruption capability for the first time in a court case involving a Sprint customer.

“Because of the way the Mobile Equipment sometimes operates,” FBI Special Agent Michael A. Scimeca disclosed to a judge, “its use has the potential to intermittently disrupt cellular service to a small fraction of Sprint’s wireless customers within its immediate vicinity. Any potential service disruption will be brief and minimized by reasonably limiting the scope and duration of the use of the Mobile Equipment.”


Find a spelling error? Please notify us by selecting the text and pressing Ctrl+Enter.