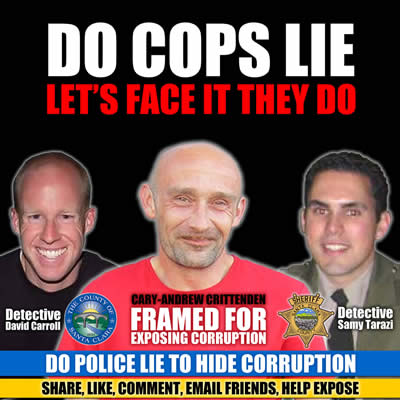 A judge, police and an entire county is helping to silence a man for speaking the truth. A man may go to prison for a crime he did not commit. A judge started a series of lies to cover up his own crimes and corruption within Santa Clara County California. This is all possible because no one along the chain of events want to look at the facts or go against a judge. Police in fact are lying to help stop the man who did the right thing.

Meet Cary-Andrew Crittenden, his story is documented HERE
The same thing that happened to the innocent men below is taking place today in Santa Clara County California. Why because people don’t want to accept cops lie.

What people need to understand, see and make viral is how this happens all the time and good people go to jail, their lived destroyed by people who lie.

Now consider a similar story all based on Police who lie and do the wrong thing. 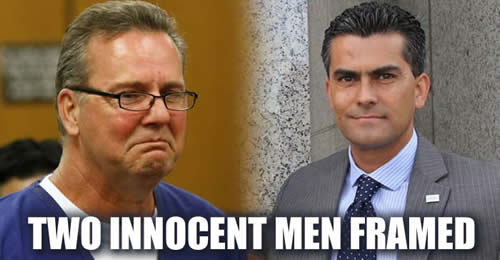 Los Angeles, CA — After collectively serving 47 years in prison for crimes that they did not commit, two wrongfully convicted men are allowed to advance lawsuits against the Los Angeles detectives and deputy who withheld exonerating evidence at their trials and pressured witnesses into falsely testifying against them.

A three-judge appellate panel denied immunity to police investigators on Wednesday after determining that they had been required to turn over exculpatory evidence in separate murder trials. Although attorneys for the police have argued that the lawsuits should be dismissed because the law was unclear in 1984 and 1991, officers have been required to disclose exonerating evidence since the 1963 Supreme Court decision, Brady v. Maryland.

Convicted of killing Jay French in 1984, Frank O’Connell spent 27 years in prison for a murder that he did not commit. Detectives focused on O’Connell after learning that he had been romantically involved with French’s ex-wife, who was in the middle of a vicious custody battle with French. In 2009, O’Connell’s conviction was overturned after a judge found that detectives J.D. Smith and Gilbert Parra had failed to turn over exculpatory evidence.

People like James Leonard should be disbarred or fired regardless