Disbanding Police to Bust Unions and Take Back Control of Justice 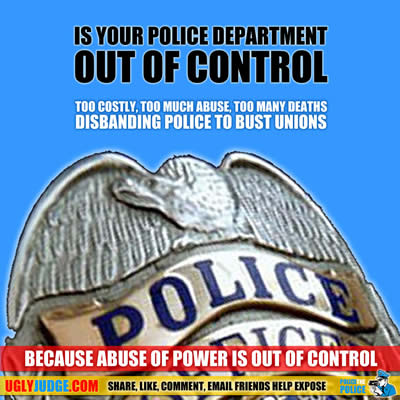 Disbanding Police to Bust Unions and Take Back Control of Justice

The Board of Supervisors doesn’t plan to renew its police department contract at the end of this year because the department’s lone officer has decided to join the Teamsters union, board chairman said.

One Officer voted to join the Teamsters Local a few months ago, voiding the renewal of the township contract. The current contract, in effect since 2004, states it will automatically renew every year, unless the board gives a 30 day notice of its intention not to renew, he added.

Days later, the Council voted 3-2 to ignore the police union contract and immediately dissolve the police department. Minutes later, two police officers were told to get their personal belongings out of the police station. A constable stood by as a locksmith changed the building’s locks. One councilor resigned in protest.

Darren Wilson’s first job was on a troubled police force disbanded by authorities
The small city of Jennings, Mo., had a police department so troubled, and with so much tension between white officers and black residents, that the city council finally decided to disband it. Everyone in the Jennings police department was fired. New officers were brought in to create a credible department from scratch.

That was three years ago. One of the officers who worked in that department, and lost his job along with everyone else, was a young man named Darren Wilson.

Fullerton CA may consider disbanding Police Department
A year after a mentally ill homeless man was beaten by police officers and later died, Fullerton leaders are expected to launch a study that could set the wheels in motion to disband the city’s 104-year-old Police Department.

City council disbands Waldo Police Department
The Waldo City Council voted 4-1 on Tuesday to disband the police department and have all law enforcement functions in Waldo be taken over by the Alachua County Sheriff’s Office.

Growing Movement To Disband Police Departments
In growing voter anger over rising taxes and high union costs, numerous small towns are voting to disband their city police departments and contract with the sheriffs department instead.

UC police department under fire
Despite harsh words from Hamilton County Prosecutor Joe Deters, who on Wednesday declared that University of Cincinnati police officers aren’t real cops, the department has no intention of disbanding.

So said UC President Santa Ono, who promised a thorough review of department policies, procedures and training in the wake of the July 19 shooting death of 43-year-old Samuel DuBose.

DuBose’s death during a traffic stop resulted in the first-ever murder indictment of a Cincinnati officer in the line of duty when Deters leveled the felony charge against Ray Tensing, a 25-year-old who joined the 78-member department in April 2014.

The police union chief instructed his members to impose a martial law-type policing regime on the city
On Internet message boards, police union activists instructed the rank and file to refuse to respond to incidents unless two units were dispatched to the scene, and to double up even if given orders to the contrary. Under this “wartime” footing, the police would simply seize the power to deploy and assign themselves, as they liked – and to hell with the chain of command and civilian authorities.