2005 11 Aviva K Bobb California Bar raves about a judge who should be in prison instead promotes Chief Justice Ronald M. George famous for LA judge Bribe cover up 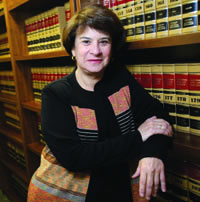 Los Angeles Superior Court Judge Aviva Bobb isn’t one to confuse wishes with reality. In her early days as a legal aid lawyer, Bobb, like many others, assumed attorneys would always be available for civil clients — whether those clients could afford representation or not. The legal services movement was popular with Washington political leaders, and there was no reason to believe it wouldn’t grow and thrive as the years passed.

But the ‘70s and the beginning of the new century are two very different times, and Bobb says it’s important to come to terms with the fact that more and more people are representing themselves. “You have to develop a system that doesn’t pretend everybody has a lawyer,” she says, noting that such an assumption goes counter to traditional thought.

The jurist has more than taken her own advice, and, for her actions aimed at helping low-income litigants and especially the children who get caught in custody and other family law legal issues, she received the 2005 Benjamin Aranda III Access to Justice Award. The award is co-sponsored by the Judicial Council, the State Bar, the California Judges Association and the California Commission on Access to Justice.

In presenting the award, State Supreme Court Chief Justice Ronald George praised Bobb’s success in “improving access to the courts for all, stressing fairness and respect for all litigants and promoting projects that assist self-represented litigants in navigating their way through the legal system.

From her earliest days as a practitioner, she has advocated for low- and moderate-income persons, and she brought that passion with her to the bench.”

A graduate of Boalt Hall School of Law, Bobb, 59, began her legal career with San Fernando Valley Neighbor-hood Legal Services and was later executive director of the Legal Aid Foundation of Los Angeles. In 1980, she was appointed to the Los Angeles Municipal Court and in 1994 to the Los Angeles County Superior Court. From 2000 to 2004, she served as supervising judge of the Family Law Department, overseeing 50 family law courtrooms. This year, she moved to Probate Court.

Among the accomplishments for which Bobb was given the Aranda award:

She created a central location for family law-related clerical functions, which had been dispersed throughout the courts, to a single site near the Family Law Department and the children’s waiting room so litigants could more easily drop off their children, pick up forms and work with a court staffer to fill out and file them and appear for hearings. It has been estimated that between 50 and 80 percent of family law litigants represent themselves. She has streamlined the process. She enlisted the help of JusticeCorps, a project of AmeriCorps, to provide assistance to pro per litigants.

Bobb expanded parenting and other skills classes for low-income parents and increased the availability of affordable court-conducted child custody evaluations. She also created a videotape message for parents in family law court stressing the need to make their children top priority during divorce. Through outreach programs, she has educated litigants about their options in family law cases.

As a member of the Pro Per Working Group, she has worked to address such issues as fee waivers and the availability of interpreters for low-income litigants who represent themselves.
She has initiated meetings among judges, child support workers, family law court administrators, court commissioners, district attorneys and public defenders and family law facilitators to better coordinate responses to child support issues.

She joined forces with legal services providers, law enforcement and superior court officers in an effort to expose and prosecute non-attorneys who pass themselves off as lawyers and take advantage of low-income litigants, many of whom speak little or no English.

Bobb credits George with being the leader in helping those in need. “The chief justice has probably done more in California to improve access to justice than anybody in the state,” she says. He “has really put a lot of resources into establishing systems that work for unrepresented people.”

She says she was just doing her job in advocating for the children and the litigants who came through the Family Law Department, many of whom do not have lawyers but cannot navigate the legal system by themselves. She says she wanted to make the process easily accessible and as simple as possible and to focus on the needs of the children in often tempestuous divorce cases.

Now she’s going to focus on the elderly as a judge in probate. “I spent seven years working on children’s issues. Now I want to work on elder issues,” she says. As in Family Law Court, she’s not likely to accept the status quo. “I hope in the future to add a social services component.”


Last Updated on 3 months by admin