By admin Facebook, Government, How to Expose them, Judges, Lawyers, Links, Police, Victims, Who is UGLY, Who to Report them to

His Mission Statement is very clear, however what he does is another thing

County Executive provides support to the County’s Board of Supervisors, to the County’s various organizations, and to the residents and businesses of Santa Clara County. The Office ensures the implementation of legislative mandates and Board policies. It provides analytical support, strategic planning, policy analysis, and budgetary oversight for the County organization. In addition, it seeks to safeguard civil rights, and to educate, inform, and advise both those who administer and those who receive County services.

While seniors and the mentally disabled are being cheated, robbed, abused and left homeless Jeffrey does NOTHING

When POLICE are used by dishonest government to act as thugs who extort and harass anyone who comes forward with evidence about crime the system has gone very wrong. Exposing judges is a very dangerous issue, because who do police stand behind…See More

Meet Orry Korb, Counsel for Santa Clara County San Jose California. He was appointed to his high paying and powerful position. He’s responsible for supervising attorneys in General Government, Health and Hospital, Social Justice and Impact teams, as well as the attorneys representing the County Assessor.

When informed that judges, lawyers, law firms and housing organizations were illegally taking advantage of the elderly and mentally disabled he failed to act properly. Instead police were informed that those bringing the information to his attention were terrorist and criminals. Statements where twisted, stories turned around and finally the police were used against the public as thugs and abusers.

When dishonest government uses Police to harrass, punish and hunt down people who have done the right thing our system is used against us. The reputation of police is further damaged and tax dollars are lost when police are used to silence, extort and stop GOOD PEOPLE who did nothing but inform government about crimes.
Santa Clara County California San Jose Judge Peter Socrates Manoukian was found to be involved in sabotaging cases involving senior citizens and the disabled.

WHAT IS ORRY KORB HIDING AND WHO:

Similar to now convicted “Kids of Cash” JUDGE Mark Ciavarella Jr. who was accepting bribes and sentencing kids to camps for cash. JUDGE Peter Socrates Manoukian was exposed for doing something similar with the elderly and mentally disabled. Judge Manoukian was sabotaging cases on purpose in favor of big business.

The above people have documents, evidence and direct violations of their rights by the named judges and Public Guardian.
When one victim filed a complaint with HUD the complaint mysterioulsy was stopped NOT ALLOWED TO FILE HUD COMPLAINT
CASE# 1-12-CV-226958

Even the media got involved and began exposing and documenting the events which affected totally defenseless and vulnerable senior citizens.

The story gets worse and in fact exposes the very people who should be protecting your mothers and fathers. THE PUBLIC GUARDIAN

More details and the entire story can be found at

In the middle of all these lies and manipulation one top government official has already stepped down: LEE PULLEN Social Services Santa Clara County Director who was at the top of the food chain and exposed quietly exits

Imagine Judges using Police to destroy and rob the most vulnerable of our society
News ABC 7 Reports with video, this woman is directly involved with the same judges and government officials.

What this has to do with POLICE is how they are often used against the public “to serve and protect” WHO? Not the tax payer instead they’re used as thugs to silence good people who come forward with facts and information.

IS THIS WHAT POLICE ARE PAID TAX DOLLARS FOR? To harass and stop people from reporting crimes about judges, lawyers and government? 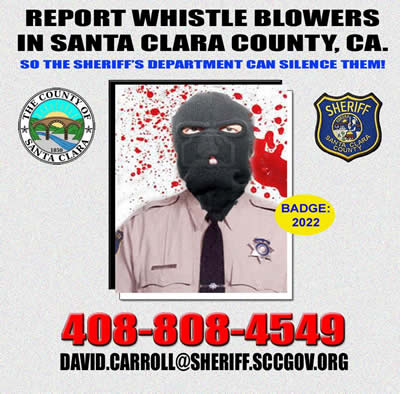 is acting like a paid thug to stop justice and protect seniors, the disabled and mentally ill.
Imagine an officer of the law who ignores his sworn duty and “To Protect and Serve”.
Is this why so much corruption and government abuse has surfaced in Santa Clara County California?

After all YOU’RE paying him with your tax dollars

Last Updated on 9 years by admin