By admin Government, Real Heroes, Who is UGLY 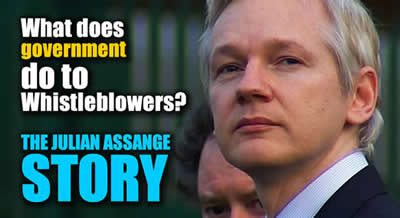 IS THIS WHAT GOVERNMENT DOES TO PEOPLE WHO COME FORWARD WITH GOVERNMENT CORRUPTION AND CRIMES?

Julian Paul Assange is an Australian editor, publisher, and activist who founded WikiLeaks in 2006. WikiLeaks came to international attention in 2010 when it published a series of leaks provided by U.S. Army intelligence analyst Chelsea Manning.

“bring important news and information to the public… One of our most important activities is to publish original source material alongside our news stories so readers and historians alike can see evidence of the truth.”

TRUTH: The manual showed the Army had a policy of keeping some prisoners from Red Cross inspectors and holding new prisoners in isolation for two weeks to make them more compliant for interrogators.

TRUTH: The messages included exchanges from “Pentagon, FBI, FEMA and New York Police Department” officials. “We hope that its entrance into the historical record will lead to a nuanced understanding of how this event led to death, opportunism and war,” WikiLeaks said of the release.

Video of US helicopter killing civilians

TRUTH: Army soldier Bradley Manning, a transgender woman who later became known as Chelsea Manning, was later arrested for the release of the video and other classified material about the war and civilian deaths.

TRUTH: The documents included information about civilian deaths, the hunt for al-Qaida leader Osama bin Laden and Iran’s backing of militants in Iraq.

November 2010 to September 2011
LEAK: Julian Assange’s WikiLeaks released more than 250,000 unredacted U.S. diplomatic cables dating from December 1966 to February 2010 in what was referred to as “Cablegate.”

TRUTH: Then-Secretary of State Hillary Clinton called the release “an attack on the international community.” The documents included verification that the U.S. had conducted secret drone strikes in Yemen, details of U.S. efforts to get information on United Nations representatives, a push by Saudi Arabia’s royal family to have the U.S. strike Iran and a description of Russia under Vladimir Putin as a “virtual mafia state.”

1. The Saudi King pressed for a U.S. attack on Iran

King Abdullah, the aging ruler of Saudi Arabia, has repeatedly urged the U.S. to attack Iran—”cut off the head of the snake”—and destroy its nuclear facilities. It’s not just Saudi Arabia, though. According to the cables, leaders in Israel, Jordan, and Bahrain have also called for military action against Iran.

2. Iran may have North Korean missiles

The Islamic nation reportedly obtained missiles from North Korea capable of attacking Russia and Western Europe. Iran is said to have 19 North Korean BM-25 missiles, and officials warn the rockets might give Tehran “the building blocks” to build larger, long-range missiles on its own.

3. The U.S. is in a nuclear standoff with Pakistan

The U.S. has been trying to remove highly enriched uranium from a Pakistani research reactor for three years, fearing it could end up being used in a nuclear device. Pakistan has so far refused to grant access, as its officials worry that local media would portray the move “as the United States taking Pakistan’s nuclear weapons.”

4. The U.S. has been secretly bombing Yemen

The U.S. has launched covert missile attacks on terrorist targets in Yemen. But in a meeting with Gen. David Petraeus, Yemeni president Ali Abdullah Saleh says “we’ll continue saying the bombs are ours, not yours.” These air strikes killed several civilians, says Justin Elliott at Salon, and this revelation may yet “spark a backlash against Saleh.”

5. China has been cyber-attacking Google, the Dalai Lama

The cables confirm that Chinese cybe-terrorists were behind an intrusion into Google’s computer systems last year. The attack prompted Google to withdraw from the country in March 2010. Chinese hackers have also broken into the U.S. government, businesses, and even the personal computer of the Dalai Lama, according to the leaked cables.

6. Hillary Clinton has reportedly ‘spied’ on the U.N.

The secretary of state issued a classified directive ordering U.S. diplomats to gather information on the leadership of the United Nations, including credit card numbers, DNA, fingerprints, and iris scans. Officials targeted included U.N. Secretary General Ban Ki Moon and representatives from China, Russia, France, and the U.K. This may violate international treaties, suggests The Guardian.

7. Silvio Berlusconi and Vladimir Putin have a special relationship

The friendship between the Italian and Russian prime ministers goes even deeper than previously thought, reports The Guardian. Cables detail the exchange of “lavish gifts,” deals over lucrative energy contracts, and “the use by Berlusconi of a ‘shadowy’ Russian-speaking Italian go-between.”

When Ahmed Zia Massoud, Afghanistan’s vice president, made a trip to the United Arab Emirates last year, he was discovered to be in possession of $52 million in cash. In a cable, the American Embassy in Kabul confirmed Massoud was allowed to keep this “significant amount” without explaining why or how he came to be carrying it. Massoud denies carrying the cash.

9. The U.S. bartered with Guantanamo prisoners

The State Department was so desperate to empty Guantanamo Bay that it attempted to barter with various countries to take prisoners. Slovenia was told it might receive a visit from President Barack Obama if it accepted detainees, and the island nation of Kiribati was offered millions of dollars in incentives to accept Chinese Muslim prisoners. American diplomats suggested taking in prisoners would be “a low-cost way for Belgium to attain prominence in Europe.”

TRUTH: The emails, which U.S. intelligence later determined had been stolen by hackers working for the Russian government, appeared to show that the DNC had favored Clinton over her rival, Vermont Sen. Bernie Sanders. Among the damaging information in Podesta’s emails was the news that then-acting DNC Chairwoman Donna Brazile had given the Clinton campaign debate questions in advance.

According to the indictment, Assange was accused of conspiracy to commit computer intrusion in order to help Chelsea Manning gain access to privileged information which he intended to publish on Wikileaks. This is a less serious charge in comparison to those leveled against Manning, and carries a maximum sentence of five years with a possibility of parole. More

NEWS STORIES ON THE PROSECUTION OF JULIAN ASSANGE