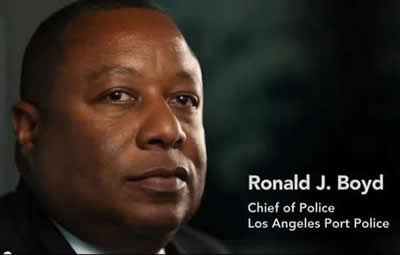 Nov. 2, 2004 The Port of Los Angeles today announced the appointment of 24-year law enforcement veteran Ronald J. Boyd as Chief of Los Angles Port Police. A member of the Port Police from 1982 until 1999, Boyd rose up the rank to lieutenant before joining the 200+ strong police force at Los Angeles World Airports, where he currently serves as Patrol Services Commander and Assistant Airport Security Coordinator.

chief of the Port of Los Angeles Police Department was sentenced to two years in prison for failing to report more than $1 million in income. Ronald Jerome Boyd, 57, was also ordered to pay $305,054 in restitution and two years of supervised release after he gets out of prison.

He pleaded guilty on Feb. 3 to federal charges of tax evasion and making false statements to FBI agents.Boyd, who retired from the Port of L.A. on Nov. 29, was indicted in April.

According to the U.S. District Court federal indictment, Boyd and two business partners formed BDB Digital Communications, which entered into a revenue-sharing agreement with the company developing the app. They agreed to receive a share of the company’s revenue by marketing and selling a similar app, MetroWatch, to other government agencies. Boyd was expected to receive about 13.33% of the revenue, according to the U.S. attorney’s office.

Boyd admitted to lying to federal investigators after telling them that he had no financial stake in MetroWatch, according to the indictment.

Boyd, who once worked as a valet to singer Ray Charles, defrauded the city “by means of bribery and kickbacks” and provided confidential information about the port to the software vendor, according to court papers.

Federal prosecutors said he failed to disclose more than $1.1 million in income on his 2007 to 2011 tax returns from At Close Range Inc., a Torrance-based security company that he operated.

Boyd was indicted in April 2015 following an investigation into charges he accepted a bribe in connection with the development of an official smartphone app called Portwatch to be marketed to other law enforcement agencies.

The indictment alleges that Boyd helped PortWatch’s developer tailor its responses to the Port of Los Angeles’ contract proposals; edited the company’s contract with the port so that he, as police chief, would be responsible for overseeing the progress and development of the application; and met with then-Los Angeles City Atty. Carmen Trutanich and then-Mayor Antonio Villaraigosa regarding PortWatch.

The tax evasion count stemmed from the failure to disclose his total income on his tax returns from 2007 to 2011, his attorney said. The income that was not disclosed came from the owner of a company that did business with the the Port of L.A., American Guard Services, prosecutors said. The misdemeanor count was related to his failure to file taxes in 2011 for the Torrance-based security company that he had an ownership interest in, At Close Range Inc., Podberesky said. In his plea agreement, Boyd admitted to not filing taxes on the company from 2007 to 2011, prosecutors said.

In the initial 16-count indictment issued in April 2015, Boyd was accused of “honest services” wire fraud alleging he operated a scheme to defraud the city and the Harbor Department of their right to his honest services.

As part of the plea deal, prosecutors agreed to drop the federal corruption charges that alleged Boyd, 58, hid his business ties to a software developer he was helping to win a contract at the port, according to a spokesman for the U.S. attorney’s office in Los Angeles.

On the day he was scheduled to go to trial, the Torrance resident entered his plea before U.S. District Judge R. Gary Klausner.

In a related case, the ex-assistant chief of the Los Angeles Airport Police Department was sentenced last month to probation. Brian Walker pleaded guilty in June to a misdemeanor tax fraud count and paid about $10,000 in restitution. According to federal prosecutors, Walker did not report income from his work with At Close Range Inc., a Torrance security company partly owned by Boyd.

Prosecutors wrote that although Walker reported that he made about $150,000 in 2012, his income was actually “substantially higher.” Walker stepped down from his job Sept. 12