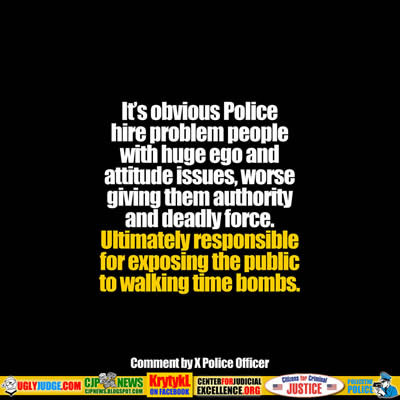 Growing up you’re taught to respect and look up to others, especially police officers and judges. However as life goes on and you’re exposed to the truth you find out it’s all a false image. An image often abused by the wrong people who hide behind a role to steal, lie, cheat and even kill.

We’re told going to court you’ll get justice but when you find out the hard way that the judge is nothing close to honorable you understand how the American public is lied to and tricked into going along by false words like “Rights, freedom, law, justice and equality”.

To make matters worst both the law enforcement and legal fields are infected with totally corrupt and dishonest management. Their intent is to keep their fields dishonest and controlled based on greed and profit not to “protect or serve”.

Self serving and protecting law enforcement has become a joke and way to protect criminals who have no business with any authority or deadly force.

Judges on the other hand who should be honorable and fair are commonly bribed and often ignore crimes or rights violations,

We’ve given them too much power and immunity. As they say “Power corrupts; absolute power corrupts absolutely” and most of the time judges and police show obvious signs of this abuse.

Unarmed victims are killed by the thousands each year, nothing compared to the paltry number of  police killed. We’ve allowed them to make deadly force the only solution. The prosecution rate is an obvious sign of how they get away with murder.

I’ve run into my own personal real experiences with judges and police. One totally ignorant and stupid cop once told me “You were being elusive by not answering your telephone”. What you notice with dishonorable judges is how they ignore crime, perjury and abuse that goes on before them. Most are too cowardly to do anything obvious and most just hide it all behind courtroom walls.

Judges are no different and in bed with police judges will never prosecute fairly nor will police prosecute judges even if guilty. Until police and judges realize the same fear the public has when committing a crime nothing will change. No one is above the law and everyone must be prosecuted equally.

The public also needs to be warned about the common practice and scam made famous by the churches. If exposed for a crime like molestation of a child, have them resign then move them to another church. Police and judges use this old scam often today. Keeping their lucrative benefits and retirement plans they just change departments or locations going on to commit more crime and abuse.

At least one police department in Connecticut deliberately and officially refuses to hire people who are too smart.
As a police officer in a small Oregon town Sean Sullivan was caught kissing a 10-year-old girl on the mouth.

Mr. Sullivan’s sentence barred him from taking another job as a police officer. But three months later, in August 2005, Mr. Sullivan was hired, after a cursory check, not just as a police officer on another force but as the police chief. As the head of the department in Cedar Vale, Kan., according to court records and law enforcement officials, he was again investigated for a suspected sexual relationship with a girl and eventually convicted on charges that included burglary and criminal conspiracy.

“It was very irritating because he should never have been a police officer,” said Larry Markle, the prosecutor for Montgomery and Chautauqua counties in Kansas.

The Los Angeles County Sheriff’s Department acknowledged that it hired about 80 officers who should have been disqualified because of problems in their backgrounds including criminal convictions and poor job performance.

COMMENTS BY ACTUAL POLICE OFFICERS
“I’m a retired officer from the East Coast, and I can honestly say that I wish I never became a police officer. I did my best to do good during my career, but the administration kept bringing me down. I think I only made a dent in the world. I never moved mountains like I dreamed I would when I was a kid.

I had always wanted to be a police officer. I watched all the cop shows and movies, read cop books, and even dreamed about being a police officer when I slept at night. I think I just fell in love with the movie version of a cop, not the real version. Give it some real thought before you sign the dotted line.”
More

Then there’s that old question “Why don’t the good police officers do something about the dishonest ones?” It’s because the system does not support honesty or a whistleblower, all the so-called protections are nothing more than false protections and lies to cover up what is really going on.

Chiefs have a stake in selecting future law enforcement officers. During the study interviews, one chief stated that leaders could be fired for something they personally did not do because they ultimately are responsible and held accountable. Consequently, when police chiefs go to sleep at night, they must have 100 percent faith and trust in their officers. However having said that, is that what’s taking place as often when police do wrong nothing is done, there is no accountability if you think a paid vacation and a few days no pay are punishment befitting murder?

Having read that when you come across officers who have no respect and ego and attitude issues you know that’s a bunch of BS. How often do you think management ends up hiring family or friends even if they’re totally unfit for the job? Worse when a problem officer is dropped by one department and hired by another. We have ignorant management hiring the worst candidates. Why because there is in fact no personal accountability, they take credit for any good and always run from their bad decisions leaving the burden to the tax payer who in the end is also victimized.

What’s worse is when a police officer does wrong who investigates? A friend or someone totally un-objective who works with that officer. It’s a broken system that they refuse to allow you to use when you commit crimes but demand they use it when they do.

“When people work with each other week to week, it’s highly unlikely that they’re going to be as aggressive” in an investigation, said Tim Lynch, director of the CATO Institute’s Project on Criminal Justice. A lawyer with the libertarian think tank, Lynch also oversees its National Police Misconduct Reporting Project.

No one tracks bad officers similar to the public getting a record even for non-proven events or investigations. It’s too easy and common  for a problem or dishonest cop or judge to just move to another city when exposed.

Ever wonder why so many innocent people are prosecuted? Fact is if they even think you’re guilty (forget about evidence or truth) they often do anything even dishonest hiding evidence or witnesses to prosecute in their rush to judgment and seeking fame among others having solved a crime. It’s all ego and attitude based instead of evidence, truth, witness statements, justice or law. Ever hear about some of their concepts of solving crime? Note all the 10 below are FALSE

The fact is Police and judges have too much power, that needs to be removed and put in the hands of the public, the tax payer. It never should be in the hands of government. When you research and find out who they hire as police officers or how bad lawyers are made into judges it does not take much to see the system is broken and has been for decades.

Police and judges will deny this as it exposes who many of them really are and they want to keep that false image to hide behind collecting huge salaries and benefits doing really nothing for public safety or the people they claim to serve.

It’s far too easy for ANYONE and I mean anyone to get hired. Want proof just look at all the documented cases. Why do you think so many police are against dash-cams and body cams? Only a dishonest person would object to such evidence. Think again our courts need digital recording of all audio and video which should always be public. Judges love to seal records, commit violations behind courtroom walls. Police above all are almost always turning off cameras when they should not.

News stories
Are the Police Intentionally Hiring Stupid People?
Cast-Out Police Officers Are Often Hired in Other Cities
Police hiring standards: Raise them or lower them?
LA county dept. wrongly hired 80 problem officers
Who Wants to Be a Police Officer?
Why do police officers support other officers even when they are in the wrong?
Police Chiefs Discuss the Most Important Commodity in Law Enforcement
I’m a black ex-cop, and this is the real truth about race and policing
When an officer does wrong, who investigates?
Why We Need a Database to Track Police Employment Record10 Things Police Get Wrong About Psychology
Do police have too much power? Your Say

How to PASS the Police Hiring Process